OUTSIDE THE LAW On Blu-ray From Kino 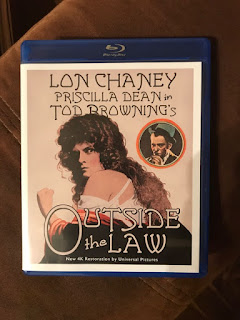 Another home video presentation of a rare silent classic from Kino. This time it is the 1920 OUTSIDE THE LAW, co-written and directed by Tod Browning.

This was an early collaboration between Browning and Lon Chaney, but it is not a tale of the macabre. Set in San Francisco's Chinatown district, it details the efforts of jewel thieves Molly Madden (Priscilla Dean) and Dapper Bill (Wheeler Oakman) from being set up by the dastardly Black Mike (Lon Chaney). The story contains many elements that would be found in most of Browning's work--a small group of criminals infiltrating the homes of naive wealthy citizens, the idea of honor (or dishonor) among thieves, false identities, con games, and lawbreakers trying to change their ways.

Lon Chaney's name may be at the top of the disc cover, but Priscilla Dean is the true star of this film. Dean is basically forgotten today (I barely know anything about her) but she was one of Universal's leading lights in the early 1920s. She appeared in a number of films under Browning's direction, and in OUTSIDE THE LAW I found her acting style to be very restrained and down-to-earth for the period. Dean's Molly is crafty and independent-minded, and she certainly doesn't need to require upon a man. If she's going to go straight, it's going to be on her own terms.

Chaney still does make a major impression as the tough as nails Black Mike. (If Chaney had lived past 1930, I think he might have become the first real gangster movie star instead of the first real horror film star.) Chaney also plays a secondary role as a kindly Chinese servant. That role seems to exist just to show off Chaney's abilities in makeup, but the character does have an important factor in the climax. That climax, by the way, consists of some very brutal fistfights and gun battles.

The climax would be even more notable if one was able to see it more clearly on this disc. At about an hour into the story, nitrate composition becomes very bad, and it lasts throughout the end of the film. I'm not trying to complain about this--Kino and Universal have done their best to make this film available to the public--but it has to be mentioned. The disc case states that this is a new 4K 35mm restoration, and for about the first hour, it looks impressive. An alternate ending from a 16mm version is included, but this does not feature the action-packed climax. There's also a comparison between some of the scenes from the 35mm and 16mm versions. The at times bombastic music score on this release is by Anton Sanko.

This disc also has a new audio commentary by Anthony Slide. He gives out a lot of info on Priscilla Dean and Tod Browning in particular, along with background on the film's production and why the movie is in the shape it's in.

OUTSIDE THE LAW may not have as much footage of Lon Chaney as some may want, but it is a very effective crime melodrama. It shows why Priscilla Dean was a major star at one time, and that Tod Browning was a fine storyteller during the silent era.