NORTH TO THE KLONDIKE

Out of all the blog posts that I have written, the one that has by far gotten the most hits is my examination of the screen pairings of Evelyn Ankers and Lon Chaney Jr. (dandayjr35.blogspot.com/2013/07/evelyn-ankers-lon-chaney-jr.html). My theory on why is that Svengoolie shows about once a month a movie featuring Ankers and/or Chaney, and those watching go on the internet to find out more about them.

In that post I mentioned that there was one movie co-starring Ankers and Lon Jr. that I had not seen--a 1942 Universal production set in early 20th Century Alaska called NORTH TO THE KLONDIKE. Recently I discovered that the film is on YouTube, in a very blurry-looking condition. But it is there, and I did view it.

I had always assumed that THE WOLF MAN was the first on-screen pairing between Evelyn Ankers and Chaney, but NORTH TO THE KLONDIKE was made first, even though it was released after. One could still say that THE WOLF MAN is the first real time Ankers and Lon significantly interacted with each other, since in NORTH TO THE KLONDIKE they barely have any screen time together.

The beginning main titles call the film "Jack London's NORTH TO THE KLONDIKE", because it is supposedly based on one of the famed writer's stories. I'm no Jack London expert, but I have a feeling that very little of his work made it into the finished product. (A number of writers are credited with the screenplay, and story credit is given to William Castle, of all people.)

A group of settlers in early-1900s Alaska are trying to build a decent community out of the wilderness. Into this area arrives a mining expert named John Thorn (Broderick Crawford). Thorn has traveled to the area at the request of the unscrupulous Nate Carson (Lon Chaney Jr.). Carson has evidence there's a gold mine nearby, but the settlers are blocking his access to it. Carson hopes to drive the settlers away by stopping shipments of their food supplies. Thorn decides to help the settlers, one reason being his attraction to town leader Mary Sloan (Evelyn Ankers). It all leads to a knock-down, drag-out fight between Thorn and Carson.

NORTH TO THE KLONDIKE is very much a "B" movie, being black & white and only running about an hour. Its plot is one that can be found in many Westerns--the conflict between those who want to settle the land and build something for the future and those who want to make a quick buck. There's nothing extraordinary here, except for maybe the outdoor locations around Big Bear Lake in California that were used (and which the fuzzy-looking version of this movie I saw on YouTube doesn't do justice.) 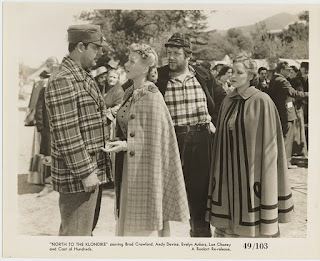 The casting of Broderick Crawford as the main hero is somewhat unique. Crawford and Lon Jr. had a lot in common--both of them were more character actor types, big burly guys who had a working class persona about them. Crawford could have easily played Chaney's role. One gets the feeling that Crawford would much rather be carousing with Lon instead of helping out the clean-cut settlers. There's a hint of romance between Crawford and Ankers' characters, but it never seems real, due to the fact the two actors appear totally incompatible with one another. Ankers is her usual regal self, which makes the viewer wonder what in the heck a lady like her is doing in the Alaskan wilderness. Evelyn constantly looks as if she's not enjoying what she's doing--and, if the stories about Crawford and Chaney's rabble-rousing on location are true, one can understand why.

Lon Jr. makes a good villain, even if he's more low-key than one would expect in the role. (If Chaney had played this same role later in his career, I think he would have been far more blustery and obnoxious.) There's plenty of comic relief character actors here, such as Andy Devine, Lloyd Corrigan, Willie Fung, and Keye Luke, and far too much time is taken up with their antics.

The director of NORTH TO THE KLONDIKE was Erle C. Kenton, a name familiar to classic Universal Monster fans. Kenton's main job here is to keep the story moving as fast as possible (and I bet he was told to keep the budget down as well). The huge brawl that Crawford and Lon engage in at the climax is well done--it has a realistic sloppiness to it, and it appears that most of it was performed by the two actors themselves.

I wouldn't necessarily say that NORTH TO THE KLONDIKE is must viewing for Universal Monster fans, or fans of Lon Jr. and Evelyn Ankers. Since the couple barely had any screen time together in it, the movie doesn't shed any new light on their future pairings. It may explain why the two were not friends in real life. One wonders what Ankers' reaction would have been if someone had told her on the set that she and Chaney would be spending a lot of working time together in the next four years.