WAR BETWEEN THE PLANETS 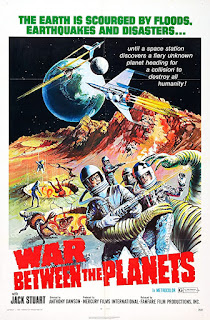 WAR BETWEEN THE PLANETS (original Italian title IL PLANETA ERRANTE) is one of four 1965 Italian science-fiction films detailing the adventures of the crew of a space station called Gamma One. All four films were directed by Antonio Margheriti (the American versions of these features use his "Anthony Dawson" moniker).

Sometime in the future, the Earth is reeling under a series of natural disasters. Scientists are convinced that these incidents are being caused by a phenomenon in outer space, and Commander Rod Jackson (Giacomo Rossi Stuart) is sent to Gamma One to investigate. The testy Jackson and his crew discover a weird planet-like mass, and the closer it gets to Earth, the more destruction it causes. The men and women of Gamma One must destroy the mass before it's too late.

WAR BETWEEN THE PLANETS isn't as wild or as woolly as the other three entries in the series. In the early part of the story there's a lot of talk, most of it techno-babble. Much of the plot deals with Commander Jackson's relationships with various crew members, which makes the movie feel like a soap opera in space. It doesn't help that the Commander is in a foul mood all of the time. (I much prefer the leadership style of actor Tony Russel, who ran the space station in the first two Gamma One films.) As in the other stories in this series, there's a romantic triangle--the Commander is engaged to a General's daughter, but he has a relationship with Gamma One's communications officer, a red-haired beauty (Ombretta Colli). This situation doesn't really go anywhere, and one wonders why it was even introduced to begin with.

Things start to heat up when the crew gets to the planetoid. The bizarre mass is mostly covered by a red, jelly-like substance that sucks in unfortunate members of the crew. The Commander and his hand-picked team find a way into the mass, where they encounter giant spaghetti-like "arteries". Apparently the planetoid is some sort of living being (this aspect of the story should have been further developed). These sequences are visually striking, but they are hampered by mediocre attempts to show the characters floating and moving about in outer space. (These "space walks" happen frequently throughout the film.)

The attempt to destroy the mass leads to a crew member's valiant sacrifice (a common story point in many 1950s and 60s science-fiction films), and the movie ends with a somber funeral--a unique way to climax an outer space adventure such as this.

Actor Giacomo Rossi Stuart was a Eurocult veteran, and he'll be recognizable to Mario Bava fans. A minor role in the film is played by spaghetti western veteran Franco Ressel (he was the main villain in SABATA). The version of this film that I watched was dubbed in English.

In summation, WAR BETWEEN THE PLANETS isn't as outlandish or imaginative as the other films in the Gamma One series.