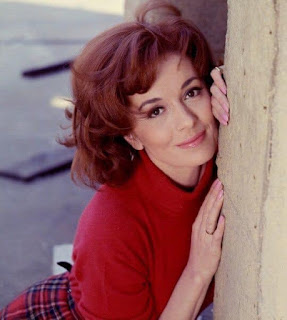 2021 is not starting off too well, with news of the death of English actress Barbara Shelley.

Shelley, who was born Barbara Kowin, appeared in eight different movies for Hammer Films, and had major roles in seven of them--more than any actress had for the company. She was also, in my opinion, the best overall actress to ever work for Hammer. Her intelligence, maturity, and versatility enabled her to play all sorts of roles, from a decidedly non-glamorous Englishwoman trying to survive a horrid Japanese POW camp in THE CAMP ON BLOOD ISLAND to an alien-possessed scientific researcher in QUATERMASS AND THE PIT. She co-starred with both Peter Cushing and Christopher Lee (a fact she was very proud of).

She also appeared in non-Hammer horror/science-fiction films such as CAT GIRL, BLOOD OF THE VAMPIRE, and the original VILLAGE OF THE DAMNED.

Shelley started out as a fashion model before seguing into acting. With her vivid red hair and tall stature, she brought a striking presence whenever she appeared on screen, but there was depth and sensitivity behind her looks.

In the 1970s, as her film roles started to thin out, she spent a season as a member of the Royal Shakespeare Company, and she guest-starred on a number of British TV shows.

Unfortunately I never was able to meet Barbara Shelley. I do have a trading card which she autographed, which I purchased on ebay (see below). Most of the articles about her online today are referring to her as a "Horror Queen" and/or a cult movie actress, and while that might be technically true, I believe that is an underestimation of her talents. 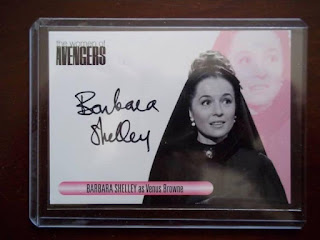