Edward Bernds is best known for his work directing various films with the Bowery Boys and The Three Stooges, but in the late 1950s, he started to make a series of science-fiction features. They ranged from the mildly interesting (WORLD WITHOUT END), to the infamous (QUEEN OF OUTER SPACE) and the just plain boring (VALLEY OF THE DRAGONS). In 1958 Bernds directed SPACE MASTER X-7, a very low budget film for 20th Century Fox.

Starting off with the obligatory stock footage, an off-screen narrator explains that America's latest Space Master satellite has returned to Earth. A determined scientist (Paul Frees) gets straight to work examining the spores from outer space that the satellite has brought back. The spores begin to grow, and the scientist refers to them as "blood rust" (this being a black & white movie, the audience cannot see what color they are). The spores grow rapidly, and soon turn into a pulsating, taffy-like substance. The blood rust kills the scientist, but not before he warns others at his research facility. Two investigators from that facility (Bill Williams, Robert Ellis) rush over to the scientist's lab, where they burn everything. They believe they have stopped the spores from spreading, but an audio tape saved from the lab reveals that the scientist was visited by a woman he once had an affair with (Lyn Thomas). The rest of the tale revolves around the investigators' efforts to stop the woman from spreading the deadly spores further.

Like most 1950s science-fiction films, SPACE MASTER X-7 is very reminiscent of several similar features, including THE QUATERMASS XPERIMENT and THE MAGNETIC MONSTER. The taffy-like spores (which envelop anything they come into contact with) are a unique "creature", but they're not used enough, probably due to budgetary concerns.

Much of the movie plays like a cheap noir, with the black & white photography, the narration, the real-life locations, and a blonde on the run. The DRAGNET-type style used here must have disappointed viewers expecting an adventure in space (just look at how the movie was marketed on the poster below). Most of the story deals with the hunt for the woman, who thinks she is wanted for the scientist's murder. The climax has the woman and one of the investigators on a plane, with the spores growing in the luggage compartment. This isn't as exciting as it sounds, due to the drawn-out nature of the tale. 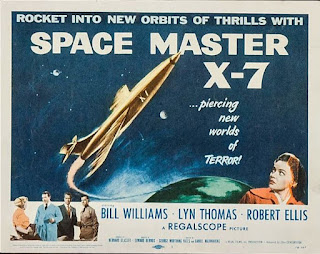 A very deceptive poster for SPACE MASTER X-7
Edward Bernds' association with the Three Stooges continued with SPACE MASTER X-7. Moe Howard plays a cab driver who gave the hunted woman a ride, and he's far more interesting than the no-name leads. Moe's son-in-law, Norman Mauer, is credited as an associate producer on this film, and he and Bernds would work together on some of the full-length features the Stooges made in the 1960s.
Famed voice actor Paul Frees plays the scientist who starts all the trouble, and this character is given a unusual slant. First of all, the man has a very strange-looking mustache, and, despite his scientific obsessions, he's got an intriguing private life. While examining the spores, his ex-girlfriend barges in, making a scene. We learn that not only is the woman married to someone else, she and the scientist apparently had a child out of wedlock! This soap opera subplot might have been a way to pad the running time, but it does give the film a unique angle.
The credited writers on SPACE MASTER X-7 are George Worthington Yates and Daniel Mainwaring, who both provided scripts for much better science-fiction films. SPACE MASTER X-7 isn't terrible, and it only runs about 70 minutes, but it brings to mind pictures that are more famous and more exciting.