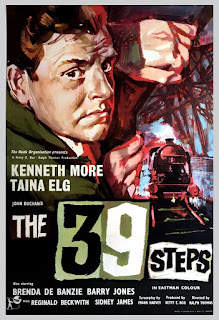 The 1959 version of THE 39 STEPS was the first remake of Alfred Hitchcock's famous 1935 spy tale. It is also proof that unnecessary remakes are not just a 21st Century phenomenon.

This version, a British production directed by Ralph Thomas, is based on the screenplay for the 1935 version, not the John Buchan novel. It changes a few things (none for the better), but a number of scenes and lines of dialogue are exactly the same--except they are not acted or directed as well.

This THE 39 STEPS is far too leisurely and lighthearted. Kenneth More plays Richard Hannay, an ordinary fellow who inadvertently gets involved in a deadly espionage plot. His attempts to prove his innocence on a murder charge lead him to Scotland, where he winds up attached to woman who doesn't trust or believe him (Taina Elg).

Kenneth More's Hannay doesn't act like a fellow who is on the run and wanted on a murder charge--he seems to act like he's out on a lark. This THE 39 STEPS is in color, and most of the scenes are brightly lit or in the daytime. There's no sense of menace or danger, and the movie sorely misses Hitchcock's dark wit.

Finnish actress Taina Elg plays the role memorably filled by Madeleine Carroll in the 1935 version. Elg's character is supposed to be a prim English schoolteacher, but her native accent keeps slipping through. She also doesn't have the chemistry with More that Carroll did with Robert Donat.

There's a number of quirky British character actors here, such as Duncan Lamont and Sid James, and there's some nice Scottish country locations, but this is a film that didn't need to be made. The Hitchcock version of the story is still by far the best.