VALLEY OF THE ZOMBIES 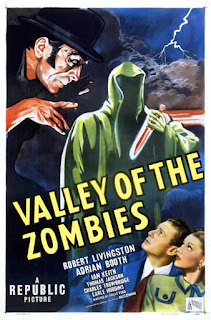 VALLEY OF THE ZOMBIES is a 1946 thriller from Republic Pictures, a company best known for their Western movies. I saw it for the first time last night, and while it's not a great film by any means, it is a cut above similar product made by the likes of Monogram and PRC.

Veteran character actor Ian Keith stars as the magnificently named Ormand Murks, a self-described "strange man". Murks, an undertaker, theorized that by constant blood transfusions, one could achieve immortality. The ghoulish guy has managed to cheat death, but he needs more blood, which he gets through theft from a local doctor's office. Murks winds up killing the doctor, but the man's associate, Dr. Terry Evans (Robert Livingston) and nurse Susan Drake (Adrian Booth) investigate and hunt the fiend down.

The title of the film refers to the place where Murks says he discovered the secret of life after death. We never get to see that place, nor do we get to see any valleys, or zombies. Most of the story takes place in urban settings. Nevertheless the movie does have some atmospheric moments, and, at only 56 minutes, it moves along fairly quickly. Director Phillip Ford (nephew of John Ford!!) even manages to inject some visual vitality here and there.

Ian Keith makes the biggest mark as the creepy Murks. Despite the tale being in a contemporary setting, Murks is decked out as if he's a villain from a Victorian melodrama. Keith also plays it as if he's hamming it up on a vaudeville stage, which is just as well--without his blood and thunder the movie would have suffered. Murks also has a strong vampiric aspect to him--at one point he puts the heroine under his control. That's rather fitting, as Keith was one of the actors up for the role of the Count in Universal's 1931 DRACULA. It's surprising Keith didn't play more roles like Murks, as his acting style is quite suited to poverty row horror.

In a movie such as this, the "normal" romantic leading couple are usually nothing but a drag. Robert Livingston and Adrian Booth, however, manage to come off as natural and likable, and they bring off the supposed humorous dialogue exchanges very well (even though there's still too many of them). Adrian Booth also appeared in a number of famous movie serials under the name of Lorna Gray. Booth has a lot more charisma that the usual low-budget scream queen.

I don't believe that VALLEY OF THE ZOMBIES has ever had a major home video release, but it deserves one, along with an audio commentary. I found the movie far more watchable than the many "so bad it's good" cheap 1940s horror movies it has been compared to.