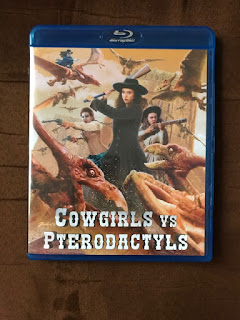 Joshua Kennedy's latest opus, COWGIRLS VS PTERODACTYLS, was officially premiered last week in his hometown of Edinburg, Texas. The movie will soon be available on Blu-ray from Amazon.

COWGIRLS is set in Texas, 1864, where numerous sightings of large, strange bird-like creatures have been reported. The creatures are actually pterodactyls, and one of them flies off with the husband of a prim schoolteacher (Madelyn Wiley). She enlists the help of a down-and-out gunfighter (Carmen Vienhage) and a bordello madam (Haley Zega) to track down the beasts and bring back her beloved.

If you are familiar with the work of Joshua Kennedy, you'll probably know what you're in for with COWGIRLS. It's an endearingly goofy story that is fun and entertaining, with plenty of references to various classic films. There's almost a Tarantino-like vibe here, with welcome narration by Josh's eternal muse, Martine Beswicke, and plenty of on-screen text. The excellent stop-motion animation of Ryan Lengyel gives life to the pterodactyls, and a newly-born creature in particular almost does a Grogu in stealing the film.

The three leading ladies are all Gooey Films veterans, and they come off much better when they are able to interact with one another. The performer who makes the biggest impact is Dani Thompson, who plays a mysterious outlaw (this character should be given her own film).

Reber Clark, who provided the music for Josh's HOUSE OF THE GORGON, does the honors again here. His rousing score emulates the Hollywood Western themes from the 1950s and 60s, and it elevates the entire production. (The music can be listened to by itself from an isolated score track on the Blu-ray.)

What really sets this release apart from Josh's other films is that he has provided important extras on this Blu-ray. There's a 50 minute "making of" program that goes into detail on not only how Josh put (and re-put) the film together, it also reveals the many difficulties he went through during a production that literally took years. Josh also provides an audio commentary where he expands upon the making-of feature, and gives insights into his personal film making style and creative techniques. Both extras are fascinating, and show what exactly a young, low budget director like Josh has to go through to achieve his vision. These extras are quite entertaining in themselves, and must be experienced, especially by those who are fans of Josh's work.

The magnificent cover art for the COWGIRLS Blu-ray is by the award-winning Mark Maddox.

I personally know what Josh went through to complete this film, and once you see it, and go through the extras on this Blu-ray, you'll be amazed--like I was--that he got it finished at all. Hopefully one day Josh will have the budget--and the time--that matches his mammoth creativity and ingenuity.

*For more information on when this Blu-ray, and Reber Clark's music score is available, please follow the Joshua Kennedy--Man of the Arts Facebook page.