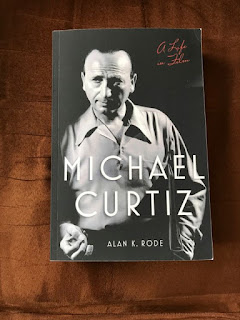 This is the paperback edition of Alan K. Rode's much-needed biography of one of the greatest film directors of all time.

The Hungarian-born Michael Curtiz had a prolific and incredible movie career. His name is attached to some of the most famous movies ever made, and he directed all sorts of stories from all sorts of genres. If one wants an example of his versatility, consider these three films: DOCTOR X, MILDRED PIERCE, and WHITE CHRISTMAS. All three of these pictures are as different from each other as they can possibly be--yet Curtiz directed all of them.

Alan K. Rode presents a detailed and extensive look at Curtiz and the movies he made. The author details Curtiz's European film career (which included dozens of movies before he even came to America in the late 1920s), the beginning of his long and successful tenure at Warner Bros., and his attempts to form his own production company after WWII.

Rode examines Curtiz's notorious work effort (before the rise of Hollywood unions, the director would work casts and crews all day and all night), and the myriad tales of the Hungarian's problems with the English language. Curtiz's complex relationships with Jack Warner and producer Hal B. Wallis are analyzed, and Rode reveals that the director had much more impact on the scripts he filmed than is naturally assumed. There's a fact-based investigation into the urban legends that charge Curtiz with mistreatment of actors and animals.

Rode also covers Curtiz's complicated personal life--despite the man's mammoth work schedule, he still found time to have multiple out-of-wedlock children by multiple women, and he carried on affairs with young starlets up to the end of his long life.

This is a massive book, which is understandable--the author claims that Curtiz directed 181 films. But it is a fast-paced narrative, due to Rode's straightforward and concise writing style. A complete Curtiz filmography is included, along with a number of behind-the-scenes photos from various films.

This is an absolutely outstanding biography. Film buffs will certainly devour it, as the book is also a mini-history of the American film industry, covering the transition from silents to sound, the Pre-Code era, the height of Hollywood in the late 1930s and early 1940s, and the breakdown of the studio system in the 1950s. Most importantly it gives Michael Curtiz some major attention. As Rode points out in the book's introduction, Curtiz is nowhere near as well-known as other great Hollywood directors such as Capra, Ford, and Hawks. This book changes that by getting away from the caricature of Curtiz as a hard-driving, English mangling martinet, and presenting him as a talented and creative artist whose work continues to make an impact on popular culture.