CD Review: THE GOOD, THE BAD AND THE UGLY Original Soundtrack Expanded Edition 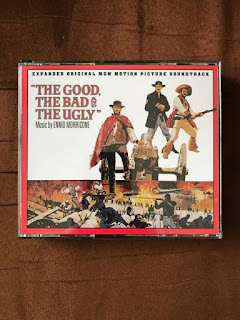 I've mentioned on this blog and on Facebook several times how the very first movie soundtrack I ever bought was for THE GOOD, THE BAD AND THE UGLY. That purchase was on audio cassette, and I've bought it many times since, including a vinyl re-release just last summer.

Now, Quartet Records, a company specializing in soundtrack releases, has released the GBU score again--but this time in a 3-CD set, that, for the very first time, includes every single music note from the actual film.

The entire music for the film is on the first two discs of this set, arranged in roughly the chronology of the movie. Disc Two also has 20 alternate tracks--and for Ennio Morricone fans, this is the equivalent of finding the Dead Sea Scrolls.

Disc Three is a re-creation of the original soundtrack album, which, ironically, only ran a little over a half an hour. All the music on the discs have been remastered from the original recording sessions, and the sound is consistently excellent throughout.

A 24-page booklet is included as well, which features stills from the film, and a discussion of the score, with several quotes from Ennio Morricone and Clint Eastwood.

The track listings on the back of the disc case are the Italian titles of the themes (for example, "The Ecstasy of Gold" is "L'estasi dell'oro"). All together, this set contains almost three hours of music.

This is one of the best tributes that the late maestro Ennio Morricone could have--his most famous score, complete and sounding better than ever.