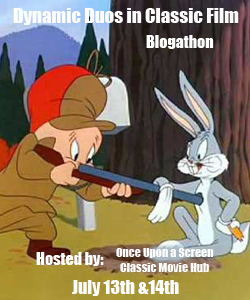 Evelyn Ankers & Lon Chaney Jr. represent one of the most unusual Dynamic Duos in Classic Film. They appeared together in a number of thrillers made by Universal Studios in the 1940s. Both of them starred in many other Universal monster movies throughout the decade, and they are generally considered to be the King & Queen of World War II-era horror films.

According to most sources Ankers and Lon Jr. did not get along too well. The beautiful Ankers was born in Chile to British parents, and she always had an aristocratic bearing about her. Lon Chaney Jr. was more of a blue-collar type of individual, even though he was the son of true Hollywood royalty.

It has been said that Lon Jr. referred to his frequent co-star as "Evelyn Shankers". Apparently Chaney may have been jealous of Ankers in some way. Despite this one never senses any animosity between them during their performances together, or the many publicity photos they posed for. 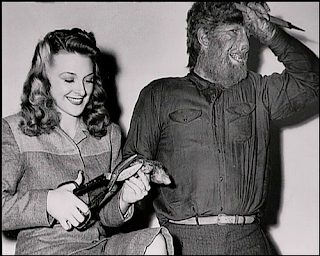 Ankers and Chaney co-starred in six films: THE WOLF MAN, NORTH TO THE KLONDIKE, THE GHOST OF FRANKENSTEIN, SON OF DRACULA, WEIRD WOMAN, and THE FROZEN GHOST. They also made separate cameo appearances in two Universal All-Star variety movies: CRAZY HOUSE and FOLLOW THE BOYS.

I have never seen NORTH TO THE KLONDIKE. The film does not seem to have been released under any home video format. What is known about the film is that Lon Jr. and co-star Broderick Crawford engaged in some serious hell-raising during the filming, which no doubt caused some frustration for Miss Ankers. 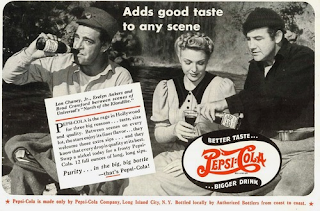 Apparently Lon Jr. and Broderick Crawford liked stronger stuff than this.
THE GHOST OF FRANKENSTEIN was made after the huge success of THE WOLF MAN. Lon Jr. got to play the Monster, and Evelyn was cast as Elsa Frankenstein, daughter of Dr. Ludwig Frankenstein. They have almost no scenes together in this one. At one point the Monster tries to carry Elsa off, but he doesn't get too far. 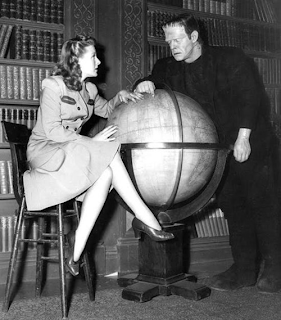 Evelyn Ankers and Lon Chaney Jr. discussing world affairs on the set of THE GHOST OF FRANKENSTEIN
SON OF DRACULA is another film where Chaney and Ankers barely interact with one another. Chaney's Dracula is more interested in Ankers' on-screen sister, played by Louise Allbritton. It's Allbritton who is the real star of the film. The viewer assumes that Ankers' character will play a bigger part in the story, such as becoming a rival for Allbritton or a presumed victim for Dracula. But Evelyn winds up being almost ignored as the film reaches it's climax.

WEIRD WOMAN is probably the best of the Inner Sanctums. In this one Chaney is a college professor (!) dealing with what appears to be a murderous voodoo outbreak. Evelyn Ankers steals the show this time from Lon Jr. as a sly and devious former flame. Seeing Ankers playing a "bad girl" for a change is a bit disconcerting, but she does it very well.

THE FROZEN GHOST was the final teaming between Lon and Evelyn. Chaney plays a hypnotist who goes into seclusion when he thinks he's killed someone during his act. Ankers plays his fiancee and assistant. The movie isn't all that great, but it is an example of how well Ankers and Chaney did while playing a couple.

I've saved THE WOLF MAN for last because it is the one movie that defines Ankers and Chaney as a "Dynamic Duo". Chaney of course plays the afflicted Lawrence Talbot, and Ankers plays the Welsh girl who catches Talbot's eye.

THE WOLF MAN was the perfect role for Lon Chaney Jr. He's a likable, ordinary type of guy...not an intellectual, but someone who's decent and well-meaning. He's also someone who is the victim of a terrible circumstance not of his making. The audience immediately feels sympathy for Talbot, and a major reason why is how Evelyn Ankers responds to his plight.

Not many people take note of Evelyn Ankers' performance in THE WOLF MAN, but they should. At first her character is taken aback by Talbot's attention to her, and then she starts to slowly warm to him. Ankers' reactions to the situation are a bit different than the usual horror movie heroine--she doesn't fall right in love with Talbot, she instead seems more concerned about him as a fellow human being. The fact that Ankers stands up for Talbot later in the story and tries to help him makes the viewer look more favorably upon him.

The doomed relationship between Lon's Larry Talbot and Evelyn's Gwen Conliffe in THE WOLF MAN is one of the most famous in classic horror film history. If Chaney and Ankers had never made another film together, their pairing in what is probably the greatest of all werewolf movies would have made then a classic duo. The scenes of Chaney in his Wolf Man makeup stalking Ankers in a mist-shrouded forest will live on forever in the annals of fantastic cinema.

Evelyn Ankers and Lon Chaney Jr. may have been two totally different people, and they may not have liked each other very much, but they will always be linked in the minds of monster movie fans everywhere. It's ironic that this "Dynamic Duo" are more known for their off-screen relationship than their cinematic adventures. If Ankers and Chaney were alive today, how would they respond to the fame of their "partnership"? Maybe it's best that we don't know. 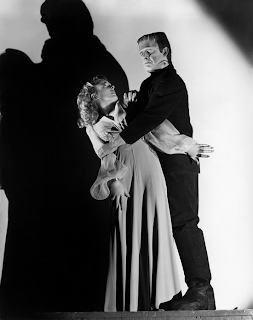