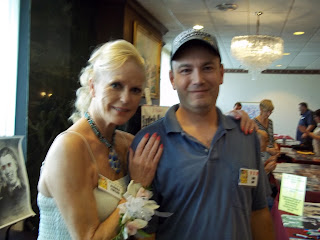 The real highlight I had at this year's Monster Bash was meeting the lady who is considered by many to be the greatest of all of Hammer Films' actresses--Veronica Carlson.

Veronica Carlson actually only appeared in three Hammer movies: DRACULA HAS RISEN FROM THE GRAVE, FRANKENSTEIN MUST BE DESTROYED, and THE HORROR OF FRANKENSTEIN. But those few roles enabled Veronica to have a huge cult following, and massive popularity among Hammer aficionados. Certainly her beauty had something to do with it, and the fact that her characters had a natural intelligence and likability that other Hammer ladies lacked.

I've spent most of my life watching Hammer movies, so the chance to meet someone who starred in them, especially someone who acted alongside Peter Cushing and Christopher Lee, was a big treat. I've heard several fans talk about how nice and approachable Veronica is, and I can verify this without question. She is one of the most gracious people I have had the pleasure to have met, and she made me feel like a was a member of her family.

I made sure that I visited her table all three days I attended Monster Bash. I got two different autographed photos--one of Veronica with Peter Cushing and one of her with Christopher Lee. She kept telling me I looked like Tom Hanks (I don't think Mr. Hanks would have liked that) and my reply to that was, "Ma'am....you can call me whatever you want."

While at Monster Bash Veronica was the subject of a Q & A session moderated by Scott Goettel. The room was packed, and Veronica was genuinely moved by the warmth of the crowd. She talked about how she became an actress and her discovery by Hammer's Chairman, James Carreras. Veronica was very proud of her work in DRACULA HAS RISEN FROM THE GRAVE and FRANKENSTEIN MUST BE DESTROYED, but she felt disappointed in THE HORROR OF FRANKENSTEIN. She felt quite rightly that the film did not have the proper Gothic aspect.

Veronica also related her experiences on acting with Peter Cushing in THE GHOUL, a film made some years later after Veronica's time at Hammer. By the time of THE GHOUL Cushing was in despair over the death of his wife, and it was very touching to hear Veronica express her personal feelings toward Peter.

I know this sounds strange, but I'm kind of glad that Veronica Carlson got out of acting to raise a family. Seeing her interact with people, and the kindness she showed toward everyone, made me realize that she's far too decent to be involved in the modern entertainment industry. You hear so many stories about performers coming to a bad end or being involved in bad circumstances, and thankfully Veronica Carlson was able to avoid all of that.

Meeting Veronica Carlson exceeded all my expectations. Hopefully I will get the opportunity to meet her again in the future. 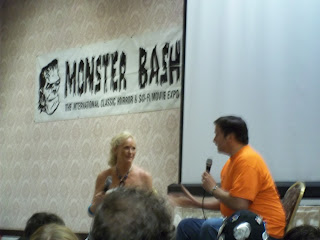 Veronica at her Q & A session at Monster Bash 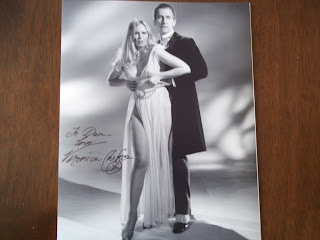 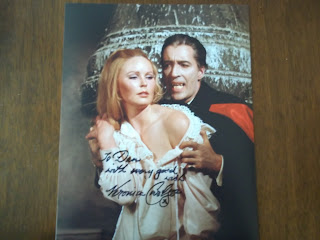