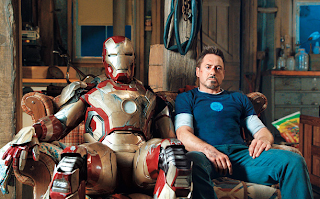 (NOTE: IRON MAN THREE is exactly how the title is presented in the film's credits....so the way I see it, that's the official title, not IRON MAN 3.)


I finally saw IRON MAN THREE the other day. I liked it, and I thought it was a very entertaining film. I don't know much about the Iron Man comic book character--as I've said before, I'm a DC guy--but in a way that enables me to enjoy the Iron Man movies more, because I don't have to get all geeky and worry about whether all the Marvel Universe details are being properly adhered to.

What makes the Iron Man series stand out is it's not so much the actual superhero that's popular among film audiences, it's the actor who plays him and the way that hero is presented. Some may not like to hear this, but Iron Man has nowhere near the iconic status of say, Superman, Batman, or Spiderman. The three heroes I just mentioned can be played by various actors because each role is more important than the person filling it. When it comes to the cinematic Iron Man, Robert Downey Jr. IS Tony Stark. Trying to make an Iron Man movie without Downey is like making a Indiana Jones movie without Harrison Ford.

What director Jon Favreau and Robert Downey did in the first two Iron Man adventures was establish a superhero who is all too human. Tony Stark is rich and brilliant, but he sure the heck ain't no Bruce Wayne. He has a ton of flaws, but he's also kind of like the cool funny guy in High School that you wanted to hang out with. It's these traits that make Downey's Tony Stark appealing to film goers. Downey has done a masterful job of melding his smart-alecky persona with that of Tony Stark. When you watch Downey act in these films you swear that he's making up the dialogue as he's going along. Downey's Iron Man is, despite his many talents, a guy ordinary people relate to....the type of guy that you could imagine sitting next to at a sports bar and shooting the bull with. (You sure wouldn't think of doing that with Bruce Wayne or Clark Kent.)

That's what makes the Iron Man movies so successful....Downey's ingratiating personality. Yes, the series has spectacle, and action, and tons of FX....but without the human element supplied by the leading man, the movies are just like all the other comic book adaptations out there. Superhero movies are getting to be a dime a dozen. If the viewer does not have a human factor that he or she can react to, all the fight scenes in the world won't be able to make up for it.

IRON MAN THREE is a lot better than the last one. Writer-Director Shane Black sets up a situation where, through most of the story, Tony Stark is stripped of his suits and his gadgets. Stark also has to deal with anxiety attacks from his experiences in THE AVENGERS. Having Stark "damaged", so to speak, is an interesting idea....but of course at the end Tony still winds up relying on all his technology, which kind of devalues the sub-plot.

According to my brother Robert, the film's script is based on a multi-issue Iron Man storyline known as "Extremis". One of Iron Man's most famous foes, the Mandarin, gets showcased in this movie, though not in the way most would expect. IRON MAN THREE appears at first to deal with international terrorism, but unfortunately it toes the politically correct line by revealing the real villains as white-collar Caucasian Americans (Marvel certainly wouldn't want to do anything to hurt the lucrative foreign market, you know).

Gwyneth Paltrow returns as Pepper Potts, and Potts' relationship with Tony Stark is another major reason why the Iron Man series works. The character of Potts gets really involved in the climatic battle....probably too much so for some fans.

IRON MAN THREE is a very good summer action movie. Marvel Entertainment has another winner on its hands, and I'm sure they are doing everything they can to keep Robert Downey in the fold. Take away Downey and this film series would lose a lot of it's luster. IRON MAN THREE reminds us that for all the sound & fury of modern film making, you still have to show a certain amount of humanity.