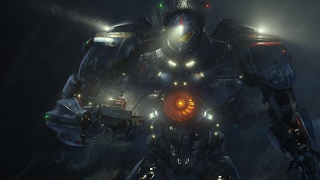 
PACIFIC RIM is a real Summer Movie. It isn't anything more than what it is--giant robots battling giant monsters. It's not a sequel, or a remake, or a reboot, or a "known" commodity--a very rare thing in this day and age. There's no trending "movie star" being paid $20 million to head the cast list, and there's no sense of pretentiousness. It's pure old-fashioned genre film making, and it's far worthier than all the other "important" titles being released this season.

Writer-Director Guillermo Del Toro (HELLBOY, PAN'S LABYRINTH) sets up the situation quickly and efficiently. The Earth is being plagued by giant monsters, referred to as "kaiju", which have come from a dimensional breach deep in the Pacific Ocean. The nations of the world have banded together and built giant robots, called "jaegers", to battle the horrific beasts. The script deals with how the jaegers are operated in a sufficient enough manner to allow the movie to get to the good stuff--the fight scenes.

Del Toro is of course making his version of a Toho Studios Japanese monster movie. There are no men wearing monster suits, but there are several other Toho-style elements. Like almost every one of famed director Ishiro Honda's many Kaiju films, various races and countries have to learn to work together to deal with the threat against mankind. The giant robots hark back to good ol' Jet Jaguar, and the kaiju of PACIFIC RIM each have their own different powers and abilities. (Unfortunately, we never really get all that good of a look at most of the kaiju....just about all of the fight scenes are staged during rainstorms, an old FX trick to make the CGI look better.)

One of the most important Toho-like elements is the inclusion of a hot Japanese female lead, and Rinko Kikuchi fills that role admirably as Mako. She's the most impressive out of all the human cast, and she has a chance to be the 21st Century version of Kumi Mizuno. 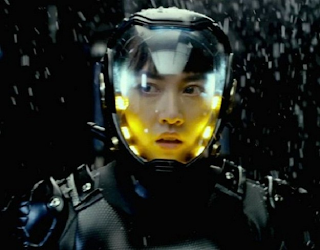 As for the rest of the "real" cast, it's filled by actors that I don't really have all that much knowledge about. The character types are pretty one-dimensional--hot-shot rebellious pilot, stern but supportive military leader, nerdy comic-relief scientists--but they are enough to serve the plot. The main drawback is that too much time is spent on the geeky doctors. Just like the comic actors in the Toho movies, their comedy is more annoying than funny.

As in STAR WARS, Del Toro keeps the human roles simple to enhance the background of the world he is creating. The production design and art direction of PACIFIC RIM make this not-too-distant future Earth very credible. Even though the movie is filled with CGI, there's a texture and a reality to all the machines and monsters. PACIFIC RIM is one of those movies you want to see again just to catch everything you may have missed the first time.

As for the battles between the jaegers and the kaiju, there's plenty of them...but Del Toro keeps each one inventive enough to avoid a "here we go again" mentality. This is one picture where you will definitely get your money's worth if you are looking for spectacle.

What I like most about PACIFIC RIM is that Guillermo Del Toro isn't trying to make a statement or a message....he's making an exciting adventure, period. The problem with a lot of big-time summer movies is that they try to act like they're NOT summer movies--but they still want you to buy the toys and the Happy Meals. PACIFIC RIM doesn't have a veneer of self-importance. It's the ultimate "big kid" movie....and I wish there was a lot more like it.