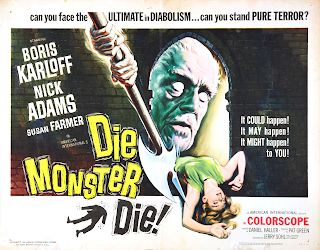 Earlier this year I purchased a Barnes & Noble edition of the complete fiction of H. P. Lovecraft. I've been a Lovecraft fan since I was a teenager, and while reading all of his stories again it got me thinking about the various films based on Lovecraft's work.

I should have written "...the various films which claim to be based on Lovecraft's work", because most of them have only a tangential connection to the author. The most well-known Lovecraft film adaptation is probably Stuart Gordon's RE-ANIMATOR, which has very little to do with the original story. In recent years several independent film makers have used the short subject form to give more authentic takes on the New England writer's tales. In 2005 a number of Lovecraft fans came together to make a 47-minute film of THE CALL OF CTHULHU. The ingenious premise for this was that the movie was presented as a 1927 silent picture. It's a fine piece of work and one can only wish that modern-day movie producers had the same sort of creative thinking.

The problem with making any type of visual representation of Lovecraft's work is that the man's imagination was so vivid and complex that it's almost impossible to convey it in a non-written form. Lovecraft's writing style is uniquely descriptive, and it has a mood and atmosphere that cannot be matched by any special effects or photographic processes. Lovecraft is truly far better read than seen, and his work does not lend itself easily to typical "Hollywood" style screenwriting tropes.

DIE, MONSTER, DIE! is a film based on Lovecraft that I've always had a fondness for. Not so much for the quality of the film, but for the fact that I first watched it on Svengoolie way back in the 1980s. An adaptation of one of Lovecraft's best stories, "The Colour out of Space", DIE, MONSTER, DIE! was produced by American-International Pictures in 1965.

The original story is set in Massachusetts, near Lovecraft's iconic fictional town of Arkham. AIP decided to move the location of Arkham to England (apparently the U. K. is far spookier than America). Screenwriter Jerry Sohl also decided to set the action of the story in contemporary 1965, instead of the original tale's early 20th Century.

"The Colour out of Space" deals with a meteorite which falls near a farmhouse, and the horrific effect it has on the family that resides there. DIE, MONSTER, DIE! also has an irradiated meteorite, but instead of a farm we get a creepy old manor house, and instead of a plain American working man named Nahum Gardner, we get Boris Karloff as Nahum Witley, an upper-class Brit.

Nick Adams plays Steve Rienhart, who arrives at the Witley estate due to the summons of Mrs. Witley (played by Freda Jackson). Steve is the boyfriend of the Witley's daughter Susan (Suzan Framer), who he met at college. After a number of mysterious circumstances, Steve and Susan find out that Nahum has been keeping a large meteorite in the cellar, and the rock is having a dangerous effect on all living things that are exposed to it.

Even though DIE, MONSTER, DIE! may be based on a H. P. Lovecraft story, it has a lot in common with AIP's Edgar Allan Poe film series. There's the film beginning with a young man arriving at a gloomy estate, the portraits of disreputable ancestors hanging on the walls, the gloomy cellar complete with diabolic paintings, and the fact that most of the cast spends a lot of time skulking around the house. Even the main titles are backed by a swirling display of colors, just like a number of the AIP Poe titles. AIP had done a Lovecraft standing in for Poe act before in THE HAUNTED PALACE; Lovecraft was a huge admirer of Poe, but his tone, and his outlook, is very different.

The film was directed by Daniel Haller, long-time art director for Roger Corman. One thing about DMD! is that it looks very good (just like all those Poe movies Haller was associated with). I wonder if Haller was assigned this film by AIP to make it consistent with the Poe series. The director does a good job in at least creating a Gothic aspect to the production. Haller would take on Lovecraft again, with somewhat middling results, in the film THE DUNWICH HORROR.

DIE, MONSTER, DIE! also bears a great resemblance to a Hammer Films picture--so much so that, if you didn't know better, you'd think it was made by Hammer. The exterior of the Witley estate is none other than good old Oakley Court, well-known to Hammer fans as the Buckingham Palace of British horror films. The cast is made up of several Hammer veterans, such as Suzan Farmer, Freda Jackson, Harold Goodwin, and Sydney Bromley. The musical score (Don Banks) and the special effects (Les Bowie) were also produced by Hammer alums.

There's also the appearance of eccentric character actor Patrick Magee, who appeared in several British fantastic films. Magee only gets one scene--he plays the village doctor, who Nick Adams questions about the Witley family's history. We expect Magee to impart some major information, or move the story along in some way....but his character offers up nothing. To have such an unusual performer such as Patrick Magee in your film and not make proper use of him is a huge waste.

One of the things that makes DIE, MONSTER, DIE! unique is the casting of Nick Adams as the leading man. Adams was a contemporary of James Dean, Dennis Hopper, and Steve McQueen, and his "angry young man" acting style in DMD! sticks out like a sore thumb. Adams' performance isn't bad....it's just unusual in that it exists in what is meant to be a Gothic horror film. Adams had appeared in a number of "A" list films, and he had even been nominated for an Academy Award. By this time in his career personal issues had gotten to him, and he wound up going to Japan to star in a couple of Kaiju movies for Toho Studios. When discussing Adams' film work many say that DMD! and the Toho movies are an example of the actor's decline. That's kind of ironic these days, when this very weekend an actor like Matt Damon is receiving kudos for starring in a science-fiction tale.

Of course the real star of DIE, MONSTER, DIE! is Boris Karloff. He gives his usual commanding presence to the role of Nahum Witley, even though most of the time he's confined to a wheelchair. Freda Jackson doesn't have much to do (her character is kept hidden most of the time for a big reveal later on) but she's able to use just her voice to make an impact. As mentioned before, Suzan Framer was an erstwhile Hammer hottie, and in DMD! she gets to wear contemporary clothes. (She looks exceedingly cute in a skirt and tight sweater.) Farmer is stuck playing the typical damsel in distress--she says the line "Oh, Steve!!" about a dozen or so times. She's basically the Marylin Munster of the Witley family....and how come she's not affected by the meteorite?

DIE, MONSTER, DIE! is a combination of so many styles, it's hard to define it accurately. It's a horror/sci-fi/AIP/Hammeresque/Poe/Lovecraft/modern Gothic thriller. It's only 78 minutes long, but it's feels like it has a lot of padding to the script (the aforementioned scene with the doctor is one example). With the budgets AIP had there's no way they could have faithfully interpreted Lovecraft's vision of cosmic horror. One does wish they had tried a little harder. For example, the script brings in a sub-plot about Nahum's late father, who apparently was some sort of diabolist. It's suggested that the meteorite is somehow the result of a "curse" handed down by Nahum's father, a supernatural element that Lovecraft would have dismissed out of hand. (Contrary to what most people think, there's very little of the supernatural featured in Lovecraft's work.)

There is one sequence, however, that comes a little close to being Lovecraftian. At one point Steve and Susan hear weird cries, and decide to investigate the manor's locked-up greenhouse. As they approach they notice the interior gives off a greenish glow.  Inside they find gigantic vegetables and bizarre plants (courtesy of pieces of meteorite embedded in the potting soil). There's also a.....thing, a sort of pulpish monstrosity kept in the back of the greenhouse, which is a hideous highlight. This is about as close to Lovecraft as the movie gets...it's not much, but it does present  a little of the author's otherworldly weirdness.

DIE, MONSTER, DIE! is certainly not a great film, or even a great monster film. My fondness for it may be because it takes me back to a time when I was discovering certain films and books which made a huge impression on me. And I have to admit, DIE, MONSTER, DIE! is a fantastic title...it's better than the actual movie.*

* In England the movie was titled MONSTER OF TERROR (how lame is that?)