Submitted For Your Approval 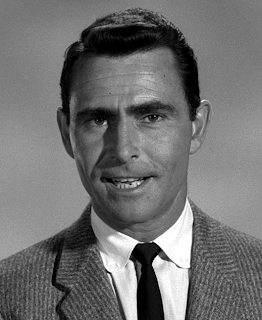 I'm now up to Season Five on my complete box set of "The Twilight Zone". (I know this is a movie blog, but don't worry...this will come out right in the end.) "The Twilight Zone" is one of my favorite TV shows of all time, and re-watching all the episodes just confirms that it still holds up after all these years.

One great thing about viewing "The Twilight Zone" is seeing the many great stars that appeared on the program. Not just TV personalities of the era, but major movie stars. And there were also major film directors and screenwriters that worked on some of the episodes as well.

For example, let's look at a Fifth Season episode entitled "Night Call". It's about a lonely old woman, played by Gladys Cooper, who starts receiving strange telephone calls in the middle of the night. "Night Call" is one of the creepiest Twilight Zone stories of them all, and there's no blood and no violence involved. The episode was directed by Jacques Tourneur, who helmed such famous films as CAT PEOPLE, I WALKED WITH A ZOMBIE, OUT OF THE PAST, and NIGHT OF THE DEMON. The writer was Richard Matheson, who of course wrote several of the program's best scripts, and wrote a number of film screenplays. Gladys Cooper had a highly distinguished stage career, and she appeared in such classic movies as REBECCA, THAT HAMILTON WOMAN, and NOW, VOYAGER.

That's a very impressive lineup for a half-hour TV show already in it's fifth season. And this wasn't a "special" episode...for "The Twilight Zone", this collection of talent was par for the course.

In another fifth season show, "Living Doll", the original music score is by none other than Bernard Herrmann. By this time (1963) Herrmann had already written some of the most famous music soundtracks in movie history--yet here he was, composing for a half-hour TV show. And this wasn't Herrmann's only episode--he scored a number of them for the series, and his "Twilight Zone" output is just as memorable as anything he did for Hitchcock.

One of the reasons "The Twilight Zone" used so many acclaimed performers and behind-the-camera talent is because it was an anthology show, and every episode had a different story and a different cast. But there's more to it than that--talented people wanted to work on "The Twilight Zone" because they knew how great the show was, and they knew how talented Rod Serling was. Today a lot of people think of Serling as just a science-fiction writer, but he was one of the most accomplished television dramatists of his time. Actors loved doing "The Twilight Zone", even those who usually appeared in only feature films.

"The Twilight Zone" is one of the programs that can be seen on MeTV stations all over America. MeTV shows various programs made the 50s, 60s, and 70s, and while most of them cannot compare in quality with "The Twilight Zone", they do have one thing in common with Serling's creation: numerous guest appearances by many famous film performers.

I know a lot of movie buffs watch the MeTV daily lineup, and they probably do the same thing I do....play a game called "Spot the Guest Star". It doesn't matter if it's "Bonanza", or "The Big Valley", or "Get Smart"....just about every episode has cast members known for their many movie roles. Most of the time I know who they are, some of the time I have to wait and watch the credits to figure out who someone is. (This is another thing that's great about MeTV--they show the complete credits of a show, instead of zipping them by in about 2 seconds, like most basic cable stations do.)

Maybe it's just me, but it seems that TV shows of the 50s, 60s, and early 70s had far more renowned guest stars than the TV shows of today do. I do have to admit that I'm not too familiar with the so-called stars of today--and I'll fully admit that I'm not in much of a hurry to find out more about them. The word "star" is used very cheaply in today's world.

But in the world of classic TV, you knew right off who a "star" really was. A number of TV shows of that era seemed to go out of their way to go after big-name talent--"Wild, Wild West" is a prime example. But even a show like "Gilligan's Island" could get a legend like Phil Silvers. And don't forget that a lot of young legends-to-be made appearances in many classic TV episodes. Between the legends already formed and the legends on their way up, the average movie buff has a lot to keep an eye out for when he or she watches those old TV shows. Sometimes looking for stars is more interesting than what's going on in the actual program.

When I was a kid dozens of classic TV shows where being shown all the time, especially on weekday afternoons (now it's just idiotic talk shows). These shows introduced me to many great movie stars (even though I didn't realize it at the time). Whenever a well-known actress or actor's career is discussed, their TV appearances are skimmed over, if they are even mentioned at all. That's too bad, because sometimes a performer's television work is just as entertaining and enlightening as the more "important" film work.