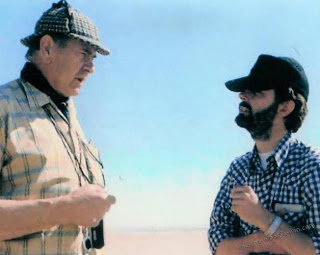 British cinematographer Gilbert Taylor died yesterday at the age of 99. Taylor's resume of credits as director of photography includes such titles as ICE COLD IN ALEX, DR. STRANGELOVE, A HARD DAY'S NIGHT, THE OMEN, and the 1980 version of FLASH GORDON.

Taylor worked with director Roman Polanski on REPULSION, CUL-DE-SAC, and MACBETH. He worked for Alfred Hitchcock on FRENZY, a movie that I just happened to watch not that long ago. There's some amazing camera moves in that.

Taylor's most famous credit is the original STAR WARS. Taylor and George Lucas did not get along too well during the shooting--STAR WARS was filmed mostly in England, and the British crew disliked Lucas' working methods. Despite that Taylor was able to contribute to an iconic cinematic look that changed films forever.

The best cinematographers are like a chameleon, even more so than a director or a screenwriter. The cinematographer has to change his methods from picture to picture--he or she can't film everything the same exact way. The best tribute I can give to Gilbert Taylor is that the films he worked on don't follow a discernible pattern, and they all didn't belong to the same genre. They all had a different visual sense. If you watched DR. STRANGELOVE, FRENZY, and STAR WARS back to back, you'd never think that the same man was in charge of photography on all three.