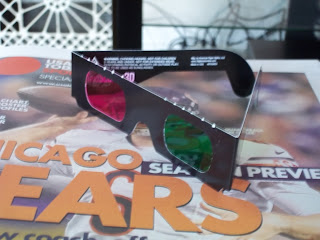 Joey DeAngelis, creator of the LonChaneyReviews channel on YouTube, recently posted a video discussing the use of 3-D in contemporary movies. Working under the theory that you shouldn't let someone else's good idea go to waste, I've decided to set down my own thoughts on the subject.

I know that this will shock you, but I'm not a big 3-D fan. Actually 3-D doesn't really affect me because I never go see the 3-D versions of today's films. For one thing, I'm cheap. Most movies made today are not even worth the normal price, let alone the special 3-D rate.

The second thing is, most 3-D movies are not really 3-D in the true sense. They're movies that have been converted to 3-D after the production is over. Slapping 3-D on any film is like colorizing a black & white picture. You're not making it better--you doing something to it that wasn't meant to be done in the first place. Most people don't understand the whole "converted to 3-D concept", and when I try to explain it to them I usually get nowhere.

Here's a typical conversation I have with a typical non-film geek friend of mine about 3-D:

DAN: What did you think of it?

DAN'S NON-FILM GEEK FRIEND: I thought it sucked! The 3-D was terrible!!

DAN: Well...how was the movie?

DAN: Well, you know that GENERIC MOVIE FRANCHISE PART FIVE was not originally supposed to be a 3-D film. It was not written, produced, directed, designed, or staged for 3-D whatsoever. It was converted into 3-D during post-production by the studio so they could make extra money.

DAN'S NON-FILM GEEK FRIEND: Because there wasn't stuff flying into your face! When stuff comes flying at you, it's cool! I like movies that are cool!! 3-D is supposed to be cool!! 3-D makes the movie more real!!


I hate to break this to you, boys & girls...but movies ARE NOT REAL. And converting them into 3-D does not make them "more real". I don't know about everyone else's reality, but in my day-to-day life, things don't go flying toward my face. There's a lot of people out there that don't like me, but it hasn't gotten that bad....yet.

When I hear people say that 3-D makes the story "realistic", it reminds me of another pet peeve of mine: the shaky hand-held digital camera. This is another device that is supposed to make things more real...because there's nothing that says "You are there" like an image that seems to come from the B roll of a local TV news segment. It's used all the time now, especially during action sequences, where most of the "action" consists of the viewer trying to figure out what the heck is going on.

An action sequence is far much more then just a bunch of people shooting at one another. Earlier this week I watched NORTH BY NORTHWEST again in honor of Hitchcock's birthday. The crop duster sequence is a seminal piece of film making--you could base an entire film studies course on that segment alone. It's magnificently shot and edited--every single frame exists for a reason. And the audience is totally aware of what is going on the whole time. Would adding 3-D have done anything for it?

If NORTH BY NORTHWEST was made today (God forbid), the crop duster sequence would have a CGI plane heading straight toward the audience. You wouldn't have the plane attacking Cary Grant--it would be chasing Ryan Reynolds or Matt Damon. And Reynolds/Damon would be running away in slow motion (because slow motion is cool!). Then, Reynolds/Damon would suddenly turn around, leap high in the air, and karate kick the plane's pilot in the neck, because Reynolds/Damon just happened to be wearing a super-suit that defied gravity.

Sarcasm? No thank you, I just ate.

Anyway, the next time you pay big bucks to see a high concept film in 3-D, please realize that said film was more than likely not supposed to be 3-D in the first place, and that you're probably not going to get stuff flying in your face for two hours.

The 21st Century 3-D craze won't be going away soon. No matter how much ticket buyers complain about it, they're still buying the 3-D tickets. One also has to factor in the fact that just about every movie geared toward kids is converted into 3-D, and parents think taking their little tykes to a 3-D movie is a special "treat". (Maybe they should buy the offspring some books instead.)

The last time I went to a theater and saw a film in 3-D was HUGO. Even though I had a headache when I got home, I have to give Martin Scorsese credit--he made a film that was meant to be seen in 3-D, and he used the effect in a original and creative way. Of course, originality and creativity are rare things these days at the googleplex. I'll stick to 2-D...and please don't get me started on "lens flare".