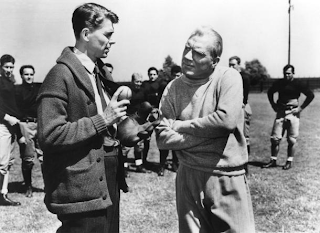 Next weekend marks the beginning of the 2013 College Football season. As some of you already know, I was born in South Bend, Indiana, and I've lived in this area most of my entire life. Because of that I have a unique perspective on the University of Notre Dame football program. I did not attend Notre Dame (I was too poor and too dumb) but I consider myself one of the "subway alumni"--a term for all those fans who faithfully root on all of Notre Dame's athletic teams, even though they have no real connection to the university whatsoever.

Being a life-long Notre Dame fan means you are exposed very early to all the various myths and legends surrounding the Fighting Irish. Most of these myths and legends are just that. Nevertheless, I can't tell you how many times I've heard a sports commentator pass on a Notre Dame "fact" that has as much reality as a Star Trek episode. And once you take into account that Notre Dame is probably the most famous Catholic institution in the USA, the myths gain even more power. Even today, several books (written by authors who should know better) present most of the Notre Dame tales as truth. If you want to know the real story behind the ND legends, the best volume to read is Murray Sperber's Shake Down The Thunder: The Creation of Notre Dame Football.

One of the many things that perpetuates the Notre Dame legacy is the film KNUTE ROCKNE ALL-AMERICAN, produced in 1940 by Warner Brothers. To many folks, this movie contains all the knowledge they have about the iconic ND football coach.

When Knute Rockne died in a plane crash in 1931, he was one of the most famous men in America. The Notre Dame team that he coached had won the last two college football national championships, and Rockne was one of the first multi-media stars--he was a spokesman for the Studebaker Motor Company, he had a newspaper column (mostly ghostwritten) that was syndicated all over the country, he had a chain of coaching schools, and he was an in-demand banquet speaker. Rockne's sudden death was the equivalent of a trending news story of today.

Throughout the 30s, there were numerous attempts to start up a Rockne film biography. The priests who ran Notre Dame and Rockne's widow Bonnie were not very receptive to the idea (unless they had final say over aspects of the story). Finally the Warner studio was able to get the project started, with Mrs. Rockne having final approval over the script.

Nearly everyone involved wanted Spencer Tracy to play Rockne, but the actor was under contract to MGM. The next most popular choice was James Cagney--but according to Murray Sperber's book, the Notre Dame Fathers were not too pleased that Cagney had supported the Loyalists during the Spanish Civil War. (The Spanish Catholic Church had been in opposition to the Loyalists.) The University and Mrs. Rockne had final say on the casting of the lead role, so Warners chose Pat O'Brien instead.

O'Brien was a very underrated character actor who had been working at Warners for years. O'Brien was at his best playing working-class authority figures--cops, priests, and of course, football coaches. Today O'Brien is mainly remembered for playing Knute Rockne, and it's hard to conceive that anyone else could have filled the role.

KNUTE ROCKNE ALL-AMERICAN is a prime example of the Warner Bros. style. It's filled with montages, spinning newspaper headlines, smooth transitions, fast-paced editing--the story moves like lightning. Just about all the Notre Dame legends up till that time are covered--Knute Rockne and Gus Dorais practicing the forward pass on the beach at Cedar Point; Rockne and Dorais using their new-found skills to upset the powerful Army team; Rockne coming up with the Notre Dame shift after watching chorus girls dance at a vaudeville show; and of course, the most controversial ND legend of all...George Gipp.

Even people who have never seen this film know that George Gipp was played by Ronald Reagan. Gipp actually occupies a very small part of the story--right after Reagan/Gipp starts coughing, the poor guy's already on his deathbed. It's generally assumed that Reagan became a star because of Gipp--but he's barely in the film, just long enough to make an impression. The script and Reagan give Gipp a cocky, devil-may-care attitude--perhaps hinting at the complexity of the real Gipp. (The actual George, who never called himself "The Gipper", spent way more time at the pool hall then he did the classroom).

The cinematic Gipp asks of Rockne the most famous deathbed request in American history, and of course Rockne uses this at just the right moment--years later, during a game in which Army is beating ND. Both scenes still hold up very well today, even though they are mostly fiction. I'm sure other ND fans won't like to hear this, but there's a lot of fiction in KNUTE ROCKNE. Knute and Dorais certainly used the forward pass, but they didn't invent it. And the coach didn't get his shift from a chorus line. However, because the movie is put together so well, and moves so quickly, you don't really have time to think about things.

Director Lloyd Bacon (42ND STREET) had worked at Warner Bros. for years, and he knew the studio style like the back of his hand. The production team did some location shooting at Notre Dame, and if you are familiar with the campus today you'll notice when watching these scenes how empty the campus looks back then. There's also a fair amount of actual Notre Dame football game newsreel footage edited into the story. But because everything's in black & white, and the camera is so far away from the field, the footage could be of Notre Dame playing any team at any time.

Pat O'Brien does a fine job as Rockne. He's stuck with a makeup job that could have been done better, but O'Brien has the mannerisms, body language, and speech pattern of Rockne down pat. O'Brien is at his best when he's giving one of the coach's patented pep talks...it's during these scenes that O'Brien's performance as Rockne is uncanny.

One does wish that the story had made Rockne more of a human figure. Of course, with Mrs. Rockne having story approval, nothing untoward was going to be suggested of the man. None of his off-campus money-making activities are acknowledged, nor is his sometimes contentious relationship with the university. At one point in the film, O'Brien/Rockne says, "I'll never leave Notre Dame". The real Rockne did try to leave ND on more than one occasion, usually because the priests didn't agree to something he wanted.

I'm not debunking these Notre Dame legends to make the school look bad, or disillusion anyone. There's a famous line of dialogue from John Ford's THE MAN WHO SHOT LIBERTY VALANCE: "When the legend becomes fact, print the legend." That line is a perfect description of how the history of Notre Dame football has been covered over the years.

There's nothing wrong with being inspired by, or enjoying movies like KNUTE ROCKNE. But when a biopic ignores or fudges historical facts, that should be pointed out as well. A major problem with movies "based on a true story" is that viewers believe what they see on the screen--and they don't bother to follow up and find out the real story. Most people don't want to know the facts behind "uplifting" films, because those facts might make them feel bad, or go against their political or religious beliefs. Whenever I discuss historical movies with someone I'm sometimes accused of being "too technical"....but when you are dealing with actual fact, I don't think there is such a thing as being too technical. Once again, movies are not real life--a movie script has to fit a certain pattern, and any person's life is far too complex to be conveyed properly in a couple of hours.

Is KNUTE ROCKNE ALL AMERICAN a 100% accurate depiction of the famed coach's life? Maybe not. But this picture wasn't made for cynics....it's a product of the classic Hollywood studio system, which didn't go out of it's way to make audiences feel bad. I love watching this movie, and I love seeing Pat O'Brien in the title role (especially when he's giving a speech). There's nothing wrong with printing the legend every once in a while....as long as you don't do it all the time.