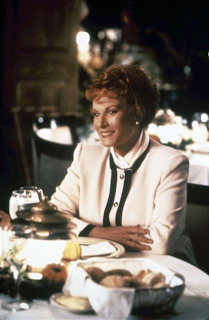 Last week was the 93rd birthday of one of the few real living screen legends, Maureen O'Hara. I was thinking about writing a blog post about one of her films, but I couldn't decide which. I didn't want to pick one of her more famous roles, such as the ones she played for John Ford. I decided to pick a movie which has sort of fallen through the cracks, and which happens to be a personal favorite of mine. It's also the last theatrical feature that Maureen O'Hara ever appeared in: Chris Columbus' ONLY THE LONELY, produced by John Hughes.

O'Hara plays Rose Muldoon, a part specifically created for her by writer-director Columbus (whose previous film before this was the mega-hit HOME ALONE). Rose is the very Irish-Catholic--and very opinionated--mother of lonely single guy Danny (John Candy), a Chicago cop. Danny stills lives with his mother, and is a bit dominated by her. This complicates Danny's new-found romance with a shy funeral home cosmetologist named Theresa (Ally Sheedy).

The generic classification for ONLY THE LONELY would be "romantic comedy", but it's more than that. The story deals with loneliness, family guilt, the quest for a so-called normal life, and the pressure a single adult has to deal with. Being a single guy myself, I'm familiar with a lot of the situations presented in this movie, which doesn't say much for my life (maybe it says TOO much).

When Maureen O'Hara made this film in 1990, she had not acted for the movies in nearly 20 years. You wouldn't know that by her performance. She still had a great screen presence, and whenever she's in a scene she dominates, and not just because her character is a bit overbearing. It would have been easy to just make Rose Muldoon out to be nothing more than a harridan. But O'Hara and Columbus turn Rose into a fully dimensional human being--she's certainly not the easiest person to get along with, but you learn to understand why she acts the way she does. In her own way Rose is just as lonely as Danny.

"The Protestants and the Jews go to the psychiatrists. We go to the priests."
--Rose Muldoon

She's also extremely politically incorrect, which provides the movie with most of it's humor. But even though Rose says a lot of insulting things, you never wind up hating her--an example of the talent of Maureen O'Hara. If an actress with lesser stature than O'Hara had played the role, Rose would have been very unattractive to an audience.

The late John Candy made a lot of comedies in the late 80s-early 90s, and more than a few of them were pretty bad (ever try watching WHO'S HARRY CRUMB?). Candy stepped up his game, however, when he was affiliated with John Hughes (see PLANES, TRAINS, AND AUTOMOBILES and UNCLE BUCK). Danny Muldoon is probably Candy's best-acted role. Danny isn't a matinee idol, but he's not wacky, either...he's a nice, ordinary guy that the audience wants to see happy. What's impressive about ONLY THE LONELY is that Danny and Theresa are not portrayed as pathetic or nerdy...they're just two people who have yet to make a special connection with someone. Ally Sheedy is a bit de-glamorized in the leading lady role, but as so often happens in romantic comedies, she gets better looking as the story progresses.

Special mention must be made of Danny and Theresa's first date. It's held on the field at an empty Comiskey Park. This is the original Comiskey Park, soon to be torn down (now you know why I like this movie so much). How was Danny able to pull this off? One of the running gags of the film is that because Danny is a police officer, he knows nearly everybody, and therefore is able to call in a number of extraordinary favors. As Danny explains it, "Sometimes it's good to be a cop." Obviously Chris Columbus and John Hughes wanted to pay tribute to the Baseball Palace of the World before it would be destroyed (1990 was Comiskey Park's last year in service), but the scene makes sense story-wise. Danny and Theresa are Comiskey Park-type of people, not Wrigley Field-type of people (believe me, there is a difference). I do have to point out that during the Comiskey date John Candy is drinking Old Style, a beer more commonly associated with the Cubs instead of the White Sox.

The supporting cast of ONLY THE LONELY includes Kevin Dunn as Danny's annoying lawyer brother (when Danny punches his brother in the face, you want to stand up and cheer), Jim Belushi as Danny's friend and police partner Sal, a married guy who keeps telling Danny he's crazy to give up his freedom, and the one and only Anthony Quinn as Danny & Rose's neighbor Nick, who tries to romance Mrs. Muldoon. It's great to see legends like O'Hara and Quinn tangle with each another, just like they did forty years ago. There's also a blink-and-you'll-miss-him cameo by the HOME ALONE kid himself, Macaulay Culkin, as one of Danny's nephews.

ONLY THE LONELY was filmed in Chicago (the climatic train station scenes were shot in Niles, Michigan). For some reason Chicago does not have the reputation of being a movie town like, say, San Francisco or New York. But the Windy City always looks great on the big screen--any movie filmed there seems to gain an extra dimension. Chris Columbus avoids for the most part using the typical Chicago landmarks. The City of Big Shoulders has a quirky, working-class kind of vibe that's hard to explain, but easy to recognize. ONLY THE LONELY definitely has this vibe--you believe that all the characters are Chicago citizens, instead of just actors trying to "act" Chicago.

ONLY THE LONELY is what is usually described as "a nice little film". It's not fall down and laugh funny, and the situations are true to life. Despite being a nice little film, it's filled with A list talent in front of and behind the camera. Even the film's composer is the great Maurice Jarre, who gives Maureen O'Hara her own Irish musical motif. The studio that released ONLY THE LONELY was Twentieth Century-Fox--back in 1991 major studios still produced and released nice little pictures.
Nowadays ONLY THE LONELY would be produced independently, and it would star actors you've never heard of, and it would be filmed in Toronto or Vancouver instead of Chicago.

ONLY THE LONELY provides a magnificent final chapter in the brilliant film career of Maureen O'Hara. It proves that even coming out of retirement she could still be a forceful personality and play a memorable role. ONLY THE LONELY isn't remembered much today, probably because it's poignant and moving, rather than uproariously hilarious. It should get more attention, and if you are a Maureen O'Hara fan, it's something you need to see if you haven't already. 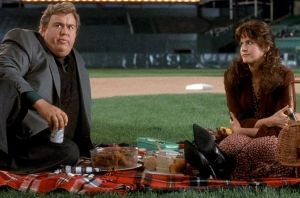 John Candy and Ally Sheedy at the original Comiskey Park