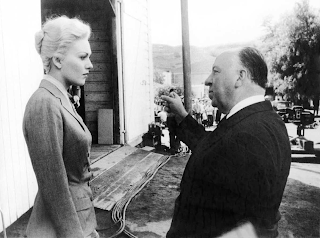 This month the Turner Classic Movies cable channel will be showing numerous films directed by Alfred Hitchcock. I own just about every Hitchcock movie on DVD, so this tribute doesn't excite me as much as it would have when I was just starting out as a movie buff. But it did get me thinking about what my favorite Hitchcock movies are. It's not as easy a list to put together as one would think. Nearly all of Hitchcock's films are considered classics, and some of them are listed as among the greatest films ever made. Even the lesser-known Hitchcock titles are worthy of study and attention. I would pick THE WRONG MAN, MARNIE and FRENZY as examples of Hitchcock's work that should be viewed by those not too familiar with them.

My number one favorite Hitchcock film is a no doubter, but after that I could have easily re-done this list in a dozen ways.

1. VERTIGO
One of my favorite overall movies of all time. I compare VERTIGO to a kaleidoscope--you see or notice something different every time you look at it.

2. NOTORIOUS
An absolutely brilliant film, with three fantastic performances by Cary Grant (his best ever, in my opinion), Ingrid Bergman, and Claude Rains.

3. NORTH BY NORTHWEST
Probably the most entertaining of Hitchcock's films. Cary Grant's Roger O. Thornhill may be the ultimate Hitchcock hero. And don't forget the magnificent music score by Bernard Herrmann.

4. THE 39 STEPS
The original template for the "wrongly accused man" thriller, a subject Hitchcock would return to time and time again. Robert Donat and the ethereally beautiful Madeleine Carroll are perfect as the mis-matched couple on the run. The best overall film of Hitchcock's "British Period".

5. REAR WINDOW
This may be the definitive Hitchcock work--it's a movie about someone watching someone else. In Hitchcock's world, everybody watches everybody.....and we (the audience) watch them. James Stewart is so good in this we take him for granted (as usual). How many other actors could play an entire film in a wheelchair...and use it to their advantage?

6. THE LADY VANISHES
Another fine piece of cinema from the British Period. A top-notch movie all the way around--exciting, funny, and suspenseful.

7. PSYCHO
I know some are going to wonder why this doesn't have a higher place on the list. PSYCHO is so well-known, and has been discussed and dissected so many times by now, that it almost has become too familiar. I still think the first part of the film--before Janet Leigh gets killed off--is more interesting than most give it credit for.

8. SPELLBOUND
I have to admit that my admiration for Ingrid Bergman plays a huge role in this movie being placed on this list. Nevertheless it is a somewhat underrated and offbeat entry in the Hitchcock ledger, worthy of another look.

9. STRANGERS ON A TRAIN
A great movie with a great idea (the idea being that two people with no connection with one another would be able to "swap" murders). Robert Walker gives an unnerving performance--it's one of the very few times an actor actually steals the film from Hitchcock.

10. LIFEBOAT
This one definitely gets very little respect, even from Hitchcock fans. Made during World War II, the story concerns the surviving passengers of a ship sunk by a German U-Boat. The entire film takes place on the lifeboat of the title. Some regard this as a "gimmick" film--but it's much more than that. Hitchcock handles the set-up in a realistic and efficient manner.