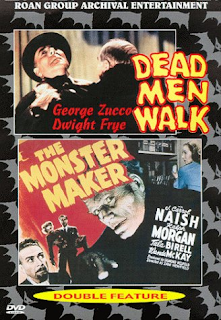 I have a huge DVD collection, and I'm always on the lookout for movies I don't own, especially if I can get them at a low price. There's a company called Edward R. Hamilton Booksellers that I've ordered a lot of stuff from. They sell discounted books and DVDs, and some of their products are out of print or unavailable anywhere else. I've gotten the following things for about $5 or $6 each: Scott Eyman's biography of John Ford, a rare book on the films of Tod Browning, and Image Entertainment's DVD of THE AWFUL DR. ORLOF. (They do charge $3.50 S&H.)

Recently I ordered from the company a double feature DVD of DEAD MEN WALK and THE MONSTER MAKER. This DVD was produced by the Roan Group, which specializes in unusual public domain movie titles. What makes Roan DVDs stand out is that the quality is usually better than the typical run-of-the-mill public domain DVD. The Roan Group's version of WHITE ZOMBIE is a must-have for any classic horror film fan.

Both DEAD MEN WALK (1943) and THE MONSTER MAKER (1944) were produced by Producers Releasing Corporation, better known to movie buffs as PRC. PRC was one of the studios that made up Hollywood's "Poverty Row". A Poverty Row outfit such as PRC would churn out dozens and dozens of films per year, and their output was simple: cowboy pictures, crime & mystery films, and horror stories. You pretty much know what you're getting when you watch a PRC movie.

Classic horror film fans have a unique love for these pictures--they enjoy laughing at them, but still watch them over and over again just the same. I'm not one of those people who watch a movie just to make fun of it--to me I've always thought that was a waste of time. The main interest in seeing a Poverty Row horror film is that most of them featured real monster movie stars, such as Bela Lugosi, John Carradine, Lionel Atwill, and George Zucco. The movies themselves are certainly not great, but the horror stars in them were given a better chance to shine than in some of their more renowned "high-class" roles.

DEAD MEN WALK is a great showcase for George Zucco. He gets to play twin brothers--the kindly Dr. Lloyd Clayton and the evil Elwyn Clayton. Lloyd has had to kill Elwyn to defend himself and protect his daughter, but Elwyn's diabolic research has enabled him to return as a vampire. The story is a very cut-rate version of DRACULA, and it gives Zucco the unique opportunity to play both a Van Helsing type of character and a Dracula type of character in the same picture. The vampiric Elwyn even has a Renfield-like helper named Zolarr, played by none other than the greatest Renfield of all, Dwight Frye. Frye steals the show, but it's kind of sad to see him doing his Renfield-Fritz act in such circumstances. (It's also sad to see how sick Frye looks, and it wasn't makeup; Frye would pass away not too long after making this film.) DEAD MEN WALK is a rather routine vampire thriller, but it is worthy of attention due to the presence of George Zucco and Dwight Frye.

THE MONSTER MAKER is quite different than most Poverty Row horror flicks. A shady scientist (J. Carrol Naish) becomes infatuated with the daughter of a famed concert pianist (Frank Morgan). The scientist injects the pianist with acromegaly, and tries to blackmail him for his daughter's hand in exchange for a cure.

THE MONSTER MAKER stands out for the plot's use of acromegaly, a rare subject for any horror film. The makeup job on Ralph Morgan is creepily effective. THE MONSTER MAKER has some similarities to films such as the 1935 version of THE RAVEN (brilliant scientist obsessed with a young woman who doesn't reciprocate) and MAD LOVE (brilliant scientist using his patient's condition for his own ends). What THE MONSTER MAKER does not have is a top-line horror star, even though J. Carrol Naish would appear in a monster movie from time to time, such as his role in HOUSE OF FRANKENSTEIN. There is a small role for future Frankenstein monster Glenn Strange. Ralph Morgan was the brother of better-known character actor Frank Morgan.
One more thing about THE MONSTER MAKER: J. Carrol Naish keeps a giant ape in his laboratory (most movie mad scientists of the 1940s did). The script seems to set up the ape for a big role in the climax--I expected that the ape would go crazy and kill the mad doctor--but the ape never really winds up doing anything. As is typical in most Poverty Row horror films, the expectations never match what's actually in the movie.

The Roan Group DVD is two-sided. The only extras are a cast list for each film, and some on-screen liner notes by horror film expert Tom Weaver. The visual quality for both films is okay, but I've seen them look a lot worse.

For those who are into collecting DVDs and movie books, you might want to check out the Edward R. Hamilton Bookseller Company.