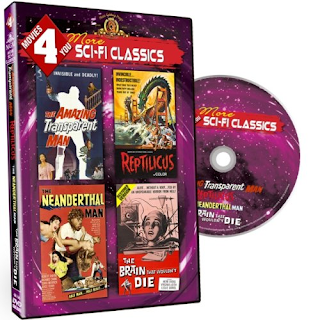 Just like the other Movies 4 You collection of low-budget science-fiction films, I bought this off of Amazon for $5. There's no way in the world anyone can call the selections in this second collection classics, unless you're an expert in false advertising. Let's take a look at the films:

THE AMAZING TRANSPARENT MAN (1960)
Cult director Edgar G. Ulmer is back with another underwhelming feature. An expert safecracker is sprung from jail by an international spy who intends to turn the thief invisible so he can steal atomic material. There's nothing "amazing" here, and the only thing transparent is the dull script. The movie's only 57 minutes long, but it takes 32 minutes before the main character is turned invisible. The main reason for having someone invisible in a movie is to include fancy FX sequences--this movie has very little scenes where anyone is transparent, and when they are, the effects are pretty lame. It doesn't help that the leading man (Douglas Kennedy) acts like a jerk from the get-go--it's hard for the viewer to care about his situation. The movie does, however, end with a really big bang.

REPTILICUS (1962)
Have you ever wondered what would it be like if a kaiju movie where made in Denmark instead of Japan? Well, this is it. The movie actually has a interesting beginning--a group drilling for minerals in Lapland strikes bits of flesh & tissue, and discovers what appears to be the frozen remains of an unknown prehistoric animal. A large tail-like piece is taken to Copenhagen for study, where it is accidentally thawed out. The piece starts regenerating, and grows into a gigantic monster, which (of course) wreaks havoc on the city.
The big problem here is that Reptilicus is represented by what appears to be a cheap rubber toy. It's one of the worst movie monsters of all time. The good idea of a giant monster being able to regenerate itself--and therefore being impervious to normal weapons--is ruined by said monsters' goofy looks. The visual aspect of Reptilicus overwhelms anything else in the picture. And it's not like the non-monster scenes are all that great. There's the typical military meetings to discuss the situation, the typical scenes of people running away in terror, the typical use of stock footage, etc. At one point some of the main characters decide to go out on the town, and we are treated to a mini-travelogue of Copenhagen--the last thing a person wants to see in a giant monster movie. (Well, at least I don't.) Other than the unusual aspect of being a Danish kaiju film, REPTILICUS has almost nothing else going for it.

THE NEANDERTHAL MAN (1953)
In California's High Sierra mountains, a professor (Robert Shayne) has discovered a serum which regresses animals--and humans--to their primitive state. To prove his theories to the scientific community, the mad prof injects himself with the serum--and we all know what happens next.
The most notable thing about THE NEANDERTHAL MAN is it's director, E. A. Dupont. The German Dupont had directed some acclaimed silent films such as VARIETY and PICCADILLY. One can only imagine how he must have felt working on something like this. (It makes me wonder--did one of the crew go up to Dupont during the shooting and ask him, "Mr. Dupont...what was Emil Jannings REALLY like?")
The story takes forever to get going. Most of the first part of the film involves the search for a saber-toothed tiger (a product of the professor's experiments). When the professor finally does become the creature of the title, he looks like a guy running around wearing a Halloween mask. There's an attempt to bring a kind of DR. JEKYLL & MR. HYDE/WOLF MAN sensibility to the picture--but it doesn't work because the professor is so unlikable in the first place, due to Robert Shayne's over-the-top performance.
There is one standout scene--it's the discovery of a set of photos showing the "progress" of the professor's experiments on his maid. And mention must be made of a young Beverly Garland, who has a minor role here but manages to out-shine everyone else in the cast.

THE BRAIN THAT WOULDN'T DIE (1962)
This is the most notable title in the set. A surgeon who is involved in some out-of-the-box experiments crashes his car driving back to his laboratory. His fiancee is decapitated in the crash, but the doctor restores the head to life and goes in search of a replacement body.
This one has a sleazy, grimy quality to it--it feels like it should have been made in the 70s or 80s instead of 1962. The surgeon's quest for his fiancee's new body takes him to a cheap nightclub, a beauty contest, and finally to a disfigured model. Apparently the surgeon needs more from a woman than just brains. While his search is going on, the fiancee's mental power grows stronger and stronger--she's even able to communicate with the hideous thing locked up in the laboratory's side room, a result of the surgeon's previous experiments. When the surgeon brings the disfigured model back to the laboratory, the fiancee commands the "thing" to break out, and all hell breaks loose.
For a black & white movie made in 1962, and set in contemporary times, there's a ton of gore on display. This contributes to the movies's grindhouse feel. A lot of people consider THE BRAIN THAT WOULDN'T DIE to be a camp classic because of the many "talking head" scenes, but it's too grotesque to be looked upon as kitsch. The overly-dramatic soap-opera style dialogue might cause a few chuckles.
Because of the gore it contains, this movie has almost always been cut. The running time here is 81 minutes, and it looks to be the full version. There's even a bonus scene from the international prints, which shows the disfigured model posing topless.

There's not a great or noteworthy selection of movies here, but for $5, it's fine for people who collect old monster movies on DVD. If you are not one of those people, there's really no reason to buy this, unless you like to laugh at bad movies. The visual quality is pretty good on all the films, and as in the first set there is a still gallery with photos from all four titles.