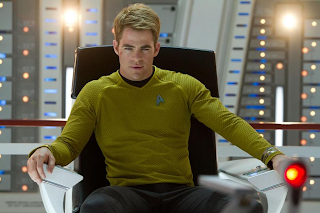 I've been making snarky comments about this movie all summer, despite the fact that I hadn't actually seen it. The film recently became available on Xfinity On Demand, so I figured the least I could do was watch it and give it a chance. Besides, I've seen every Star Trek movie, so I figured I might as well see this one at least once.

INTO DARKNESS is certainly not a badly made film...but I think it's a wrongly made one.

**SPOILER ALERT** I'M ABOUT TO DIVULGE ALL THE PLOT DETAILS OF THIS FILM. IF YOU DON'T LIKE IT...WELL, WE WARNED YOU, JUST LIKE EDWARD VAN SLOAN DID THAT ONE TIME.

The movie starts out with a big, expansive action sequence detailing how Kirk (Chris Pine) saves Spock's (Zachary Quinto) life on an alien planet, and violates Starfleet's Prime Directive in the process. Kirk gets busted by Starfleet Command, and has the Enterprise taken away from him. But a terror campaign against Starfleet leads to the death of Kirk's father figure, Admiral Pike, and Kirk winds up regaining his ship in an effort to track down the culprit responsible.

I'm sure most people know by now that the culprit turns out to be none other than Khan Noonian Singh, the 20th Century genetically engineered superman so memorably portrayed by Ricardo Montalban in the Star Trek TV series and in the STAR TREK II: THE WRATH OF KHAN feature film. Benedict Cumberbatch plays this Khan, and there's just no way he can match the pop culture identity of Montalban's Khan.

We soon learn that it was the head of Starfleet (played by ol' RoboCop himself, Peter Weller) who was responsible for Khan's ultimate actions. This sets up a "the people who fight terrorists are just as bad as the terrorists" subplot, which doesn't really fit well in the context of this movie. At one point it looks like Kirk and Khan are going to wind up working together (!)....but it turns out Khan really is a bad, bad guy after all....and that brings us to the ending.

The famous scene of Kirk and Spock saying goodbye to one another is recreated...but this time it's Kirk dying. The scene uses some of the same dialogue, and I have to admit I was cringing hearing some of science-fiction's most famous lines being re-booted.

Before I discuss that scene, though, there's still more plot to go through. Khan crashes a secret spaceship into Starfleet's San Francisco headquarters (J. J. Abrams is the guy who blew up Vulcan, remember) and he survives (because he's a genetic superman, I guess). Spock goes after him, which involves another big action scene. Because of Kirk's "death", Spock wants to kill Khan....but Dr. McCoy has found out that Khan's super blood has regenerative properties, so Spock spares Khan, enabling the Enterprise crew to use Khan to revive Kirk.

First of all....Khan. I've been railing and railing about re-boots/remakes/re-imaginings/re-workings forever, so you know how I feel about that. The point I want to make is this: It makes no sense for the "new" Kirk & Spock to go through the WRATH OF KHAN ending this early in their relationship.

The reason the climax of WRATH OF KHAN worked so well is because of the friendship of the original Kirk & Spock, which developed over a number of years. The new Kirk & Spock have only been together for two movies, and in those movies they've spent most of their time arguing with one another...heck, they barely know one another. When the new Kirk & Spock start reciting the lines from the WRATH OF KHAN death scene, it feels false.....it's like watching a high school drama club doing a play you know backwards & forwards. You know how the play should be done, but they don't.

As I've stated before, even viewers who don't care about Star Trek know about WRATH OF KHAN and can probably even quote most of the dialogue. Why would J. J. Abrams (and his many writers) want to riff off of something that is so well known? And especially something that is going to tick off all the classic Star Trek fans that Abrams hadn't already ticked off? Was Abrams (and Paramount) so unsure of the success of the second new Star Trek film that they decided that some controversy would help spur interest? If that was so, then why did they try to keep the whole Khan plot a secret for so long before the film came out?

J. J. Abrams is a talented individual....he wouldn't be in the position that he is if he wasn't. So why do a knock-off alternate version of WRATH OF KHAN? That's not a proper story, that's just a self-reflective exercise in fanboy geekdom. It's like saying, "Wouldn't it be cool if Peter Cushing were Dracula and Christopher Lee played Van Helsing?" Or saying, "Wouldn't it be cool if Sean Connery was a James Bond villain?" You can play the "what if" game all day long, and most fans like me do. The difference is...we don't have the power to make a $200 million dollar film involving a beloved franchise with millions of fans, and J. J. Abrams does. When you work in the genre of science-fiction, you have the ability to do just about anything you want. Why take the easy way out and rip-off someone else's stuff?

As for the actual movie itself....it's filled with slam-bang action sequences and impressive visual imagery...there's more things going on in INTO DARKNESS than in the first 10 Star Trek movies combined. After a while, though, the gee-whiz pyrotechnics start to become generic. Just about every major action scene involves some sort of cliffhanger-type countdown, usually involving a member of the main cast. By the time you get to the fifth or sixth one of these things, the effect is a bit diluted.

One thing I've noticed about the Abrams version of Star Trek is that the Enterprise crew is always arguing among themselves. I've mentioned before about the new Kirk & Spock sniping at each other, and it's not just them; Kirk argues with Scotty, Scotty argues Kirk, Kirk argues with McCoy, Spock and Uhura argue.....all this "humorous byplay" gets real old real fast. It's supposed to make the crew more real to the audience, but it just makes you wonder how any of these people get anything done.

If you are bored by CGI visuals and space battles, you can try to count how many lens flares there are (I'd say about 200) or you can try and keep track of how many times Karl Urban's Southern accent keeps slipping during his scenes as Dr. McCoy.

I'm really the wrong person to give an opinion on INTO DARKNESS. If you are someone that doesn't care about Star Trek, or the history of the franchise, you'll more than likely enjoy this film. It is made with a 21st Century sensibility. Is it up to you, gentle reader, to decide if that is a compliment or an insult.