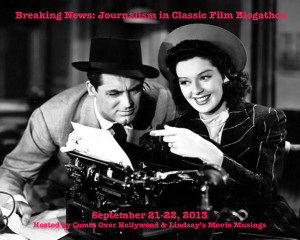 When it comes to journalism in classic film, the horror or mystery/thriller movie is rarely discussed. But it should be, because the snoopy reporter is a major character type of several famous fantastic films. There's Glenda Farrell in MYSTERY OF THE WAX MUSEUM, Lee Tracy in DOCTOR X, Robert Armstrong in THE MAD GHOUL, Douglas Spencer in THE THING FROM ANOTHER WORLD, and many, many other examples.

It just makes sense to have a reporter involved in the plot of a classic thriller. The average thriller contains murders, strange deaths, or other tabloid-like gruesome activity. The reporter character also serves the audience as a factual device--the reporter usually imparts information that the viewer otherwise would not have known. Sometimes the reporter doubles as the leading man (or leading lady), and even winds up solving the "crime" or bringing an end to whatever schemes the main villain may have planned.

Most low-budget or "Poverty Row" horrors had a reporter as a main character. The Poverty Row horrors didn't have the money to set their films in a long-ago or far away land, so they were typically set in contemporary times. The presence of a wise-cracking amateur sleuth makes perfect sense for a Poverty Row thriller.

THE MYSTERIOUS MR. WONG (1935) is about as Poverty Row as it gets. The movie was produced by Monogram, one of the "leading" low-budget Hollywood studios. This cheaply made pulp thriller stars Bela Lugosi as the terror of the Chinese underworld, Mr. Wong. But for our purposes it's Wallace Ford as Jason H. Barton that commands our attention.

Jason H. Barton is a newspaper reporter--and we assume he must be an important one, since the film shows the headline of one of his columns, and the story carries Barton's byline AND his picture. Barton is investigating a number of murders among New York's Chinese community. The murders are due to Bela Lugosi's Wong attempting to obtain "The Twelve Coins of Confucius".

Barton may be big enough to have a byline and a photo, but as movie journalists go, he's strictly run-of-the-mill. Wallace Ford's Barton is pushy, sarcastic, and obnoxious. He doesn't get along with his editor (has any movie reporter ever gotten along with their editor?), and his work habits are somewhat lacking. We never actually see him write anything--he spends most of his time blundering around Chinatown, being as annoying as possible.

THE MYSTERIOUS MR. WONG is a little over an hour long, but it seems every five minutes another poor Chinese victim winds up dead. The script makes light of this, and Barton spouts a number of racist insults. He really doesn't care too much about any of the murder victims--he's just interested in a story. Barton's investigative skills are more the product of dumb luck than ingenuity. If he's a big-time newspaper reporter, then being a member of the American media must have been an easy gig back in 1935.

Barton has a girlfriend--the newspaper's receptionist, Peg (Arline Judge). Barton treats Peg just like he does anyone else--in a smart aleck, high-handed manner. Why the cute Peg would want to have anything to do with this guy is never explained. For such a short film, Barton & Peg have a fair amount of scenes all by themselves, which must drive Bela Lugosi fans nuts.

Eventually Barton & Peg stumble into Mr. Wong's secret hideout, where they are caught by some of Wong's many henchmen (just about every denizen of Chinatown seems to work for Wong). Barton & Peg are tied up and left in Wong's basement torture chamber. Barton discovers a hidden working phone (why do you need an operational phone line in a torture chamber?), and he calls his newspaper, instead of the police. The newspaper staff comes to the rescue, and the film fades out as Barton, in his own inimitable way, asks Peg to marry him.

The role of Jason H. Barton contains just about every movie reporter cliche that one can think of. Barton wears a fedora, he smokes a cigar, he talks fast, and he's loud, pushy, and irritating. But the thing is, he's supposed to be the film's hero. One must surmise that Barton was supposed to be one of those "guy who's so annoying he's cute" type of roles that James Cagney so excelled at. The problem is that while Cagney could take an unlikable guy and make the audience like him through the force of his personality, Wallace Ford can't.

Wallace Ford had a very long and extremely varied career as a motion picture character actor. He did everything from being the leading man in pre-code films to being the old coot in widescreen westerns. His best asset was his versatility, and he worked for directors such as John Ford and Alfred Hitchcock. Ford isn't bad in THE MYSTERIOUS MR. WONG--it's just that the character is a stereotype, and Ford plays it as it was written (even though Ford seems to be ad-libbing during the whole movie). The movie is just a low-budget thriller, and Ford is just doing what he's paid to do. He would play the snoopy reporter other times in the future--including another cheap Bela Lugosi pot-boiler, THE APE MAN, where he's Jason H. Barton in everything but name.

THE MYSTERIOUS MR. WONG is not a great movie, and it may not be a great example of journalism in classic film. But it does serve as an example of how important the archetypal movie reporter was to the Poverty Row thriller. 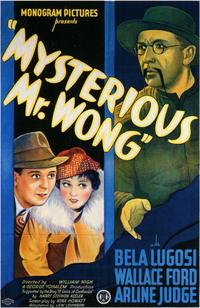