DRACULA PRINCE OF DARKNESS On Blu-ray 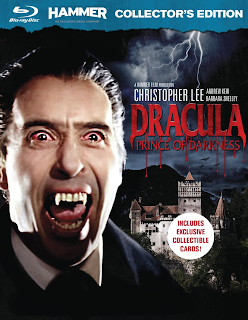 The 1966 Hammer film DRACULA PRINCE OF DARKNESS has been released on Region 1 Blu-ray from Millennium Entertainment in conjunction with the "new" Hammer. Earlier this year, Millennium came out with a DVD set consisting of DRACULA PRINCE OF DARKNESS, FRANKENSTEIN CREATED WOMAN, and THE LEGEND OF THE 7 GOLDEN VAMPIRES. You can still get this set at places like Target for about $9, and the picture quality is very good. So it's kind of strange that Millennium would choose PRINCE OF DARKNESS as their first Region 1 Hammer Blu-ray. But, being that this is a Dracula movie with Christopher Lee, Millennium more than likely figured that this would be a popular product.

DRACULA PRINCE OF DARKNESS certainly isn't one of the best Hammer films ever made, but it seems to be one of the most well known. It's the one Hammer movie most people have seen, even those who are not monster fans. When I was a kid PRINCE OF DARKNESS played on TV fairly often--Svengoolie showed it more than a few times, and Channel 7 out of Chicago played it regularly. The still photos for PRINCE OF DARKNESS pop up everywhere--in monster movie magazines, books, etc. Chances are if you've seen a picture of Christopher Lee as Dracula, it was probably taken on the set of this film.

DRACULA PRINCE OF DARKNESS was Christopher Lee's return to the role he had played so memorably in HORROR OF DRACULA (forgive the title, I'm an American). To this day no one really knows why it took so long for Lee to play Dracula for Hammer again (the featurette on the Blu-ray doesn't really discuss it). PRINCE OF DARKNESS is considered to be a disappointment compared to HORROR OF DRACULA (what vampire movie wouldn't be?), but like any other film directed by Terence Fisher, it has brilliant individual moments, such as Dracula's resurrection, the staking of Barbara Shelley's character, and the climax (even though said climax is a bit rushed). Lee doesn't show up until the movie's half over, and he has no dialogue (another Hammer "mystery"), but he proves once again when it comes to screen presence, almost no other actor can top him. Francis Matthews is very good in the thankless "David Manners" role (even though every decision his character makes is wrong), and Barbara Shelley gives the most iconic performance of her career as the doomed Helen. There's also fine work from Andrew Keir, Thorley Walters (as a Renfield surrogate), Phillip Latham (as the sinister Klove), and Suzan Farmer, one of the cutest Hammer hotties.

DRACULA PRINCE OF DARKNESS should have everything going for it--Christopher Lee as Dracula, Terence Fisher, great cast, Bray Studio sets, location work at Black Park--but it just falls short of the very best of Hammer category. Maybe it's due to the simple story--English tourists wind up getting stuck at Dracula's castle--but PRINCE OF DARKNESS remains a representative Hammer film, instead of an outstanding one.

The folks at Millennium surely know that every Hammer fan has watched PRINCE OF DARKNESS about a dozen times, so they made sure to include a number of extras. There's a 30 minute featurette entitled BACK TO BLACK, with Hammer experts Jonathan Rigby, Marcus Hearn, and Mark Gattis. It also has appearances by actors Francis Matthews and Barbara Shelley. It's a nice look at the movie but one wishes it had been a little longer. There's also an episode of the "World of Hammer" series concerning Christopher Lee, a restoration comparison, a 5 minute stills gallery (backed by James Bernard's wonderful music score), and a restored original trailer for PRINCE OF DARKNESS and FRANKENSTEIN CREATED WOMAN (which shows absolutely no scenes from either film!).  Also included in the Blu-ray case are five collectible cards, designed to look like mini-lobby cards.

The most important extra on this Blu-ray is the audio commentary, which first appeared on the Anchor Bay DVD release. The commentary features Christopher Lee, Barbara Shelley, Francis Matthews, and Suzan Farmer. This commentary is worthwhile just for historical value alone--due to the passage of time we will probably never have the chance to hear four major stars of a classic Hammer film on one commentary ever again. Lee dominates the proceedings, but at least here he's in a good mood, and he actually appears to be enjoying himself. It's too bad that Millennium wasn't able to create a new "Just the facts, Ma'am" commentary with a Hammer historian like Jonathan Rigby or Bruce Hallenbeck.

If you are a Hammer fan, you're more than likely complaining about buying this movie one more time....and you are more than likely going to go out and....buy it one more time. There are a number of Hammer films on Blu-ray in other parts of the world, but very few in North America. One assumes that Millennium will begin releasing other Hammers on a regular basis. I'm sure they expect all us crazy Hammer fans to snatch them up....but Millennium should at least come up with some interesting extras to seal the deal.