TO BE OR NOT TO BE On Blu-ray 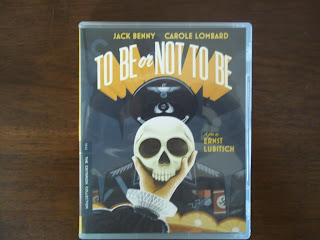 Criterion's latest classic film release is Ernst Lubitsch's TO BE OR NOT TO BE (1942). It is considered to be one of director Lubitsch's greatest works, and comedian Jack Benny's best big screen role. It is also the last film ever made by Carole Lombard.

TO BE OR NOT TO BE is a very hard film to define. On the surface it's a World War II-era satire--but it also has elements of sophisticated romantic comedy (which Ernst Lubitsch was a master of) and suspenseful spy thriller. It's also a story about acting, about really "being" or not "being". One of the wonderful things about this film is that it can be approached from a number of different ways.

It's amazing that TO BE OR NOT TO BE works well at all. Consider that the film's two lead characters are a married Polish couple who are stage actors. Playing the couple are Jack Benny and Carole Lombard, two people who are as American as you can get. Jack Benny at the time was one of the most famous entertainers in the country, due to his popularity on radio. He did not have a very successful film career, yet Ernst Lubitsch wrote the part of Joseph Tura ("that great, great Polish actor") with Benny in mind. The genius of Lubitsch was that he was able to meld Benny's radio persona into the story, instead of having the story revolve around Benny.

At the time of it's release TO BE OR NOT TO BE was looked upon by some film critics as being tasteless. This is a movie that does not shy away from the events of the German invasion of Poland. Today a movie audience can watch TO BE OR NOT TO BE safe and secure in the knowledge that the Allies won World War II. But back in early 1942, when the movie first came out, the Wehrmacht was still not that far away from Moscow, the British didn't seem to be able to defeat Rommel in North Africa, and the Japanese were running roughshod over Southeast Asia. Pearl Harbor had been bombed very recently, and the average American was dealing with a very uncertain future. It looked very likely that the Axis might actually win. Add in the fact that the leading lady of TO BE OR NOT TO BE had died in a plane crash before the film's premiere (coming back from a war bond rally, no less), it's hard to believe this film got any popularity whatsoever.

There really isn't anything tasteless about TO BE OR NOT TO BE. It's probably more realistic than most "official" war movies of the time. The plot about Joseph and Maria Tura's theatrical troupe helping the Polish Resistance outwit the Nazis could easily be remade as a serious thriller (not that I'm advocating that in any way). The Nazis are not portrayed as total buffoons--Lubitsch doesn't resort to slapstick or obvious comedy. The humor is more sly than fall-down laugh out loud funny.

There is one scene that I think is one of the funniest moments in the entire history of classic cinema. It's when Jack Benny, playing Joseph Tura playing Hamlet, starts reciting the famous "To be or not to be" soliloquy. Benny gets flustered by someone in the audience getting up and leaving. The look on Benny's face is priceless, and even when the gag is repeated twice more in the film, it still is hilarious. If you want to know how true movie comedy should be performed, just watch Jack Benny in this scene (especially if your name is Adam Sandler or Will Ferrell).

Just as good as Benny, maybe even better, is the legendary Carole Lombard. In a way, Lombard has the hardest role. She can't be as obvious or as one-note as most of the supporting cast. Her Maria Tura is always acting, even when she's not on stage. She acts one way toward her husband, one way toward her young admirer (a very, very young Robert Stack), and another way toward the various Nazi functionaries she winds up dealing with. Maria Tura is the real brains behind the Resistance operation--she's the one who sets things in motion, the one character who keeps the plot together. Lombard always looked magnificent, but in this film, because of the tragic circumstances to come, she's hauntingly beautiful. She certainly isn't a screwball girl in this picture--she projects an almost regal quality throughout the story. (Was Carole trying to be less American in this role?)

As usual for a Lubitsch picture, there's an entire supporting cast of noteworthy performers, including Sig Ruman, Stanley Ridges, Tom Dugan, and the one and only Lionel Atwill. Special mention must be made of Felix Bressart, who plays the role of Greenberg, a minor actor who dreams of appearing as Shylock in front of a major audience (a dream which comes true, in a way). The part of Greenberg was obviously symbolic for the Jewish Lubitsch.

Criterion's version of TO BE OR NOT TO BE is just what one would expect from this company. The Blu-ray picture quality is superb--Rudolph Mate's black & white cinematography is as sharp as a knife. The Blu-ray really brings out Vincent Korda's excellent production design--just like in every other Lubitsch movie, nothing looks cheap. The extras include a superlative audio commentary from David Kalat. Kalat has done several fine commentaries, but this one is one of his best, and I highly recommend listening to it. There's also a 53-minute French documentary on Ernst Lubitsch entitled LUBITSCH LE PATRON (the documentary has English subtitles). A 1916 short film directed & starring Lubitsch, PINKUS'S SHOE PALACE, is here as well, along with two radio programs from the 1940s involving Lubitsch. The supplements are rounded out by a booklet featuring a essay from critic Geoffrey O' Brien and a 1942 New York Times op-ed piece written by Lubitsch in which the director defends TO BE OR NOT TO BE.

I have a feeling that this edition of TO BE OR NOT TO BE will wind up being one of Criterion's best sellers.