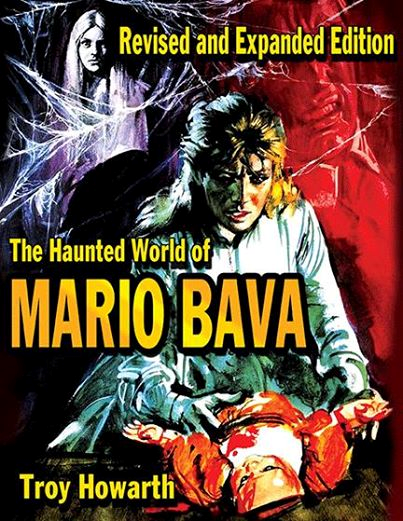 This year marks the 100th anniversary of the birth of Italian film director Mario Bava. Bava is best known as a master of the fantastic and macabre, and nearly every one of the movies he directed has a large cult following. Bava was not only a director--he was also an expert cinematographer and special effects artist (sometimes doing all three jobs at once).

Troy Howarth's THE HAUNTED WORLD OF MARIO BAVA covers all of Bava's "official" directorial credits (Bava may have had a hand in directing numerous other features). This is a revised and expanded edition of an earlier book by Howarth.

Writing about Mario Bava and his films is not an easy task, for the simple reason that Bava's work is better watched then read about. Bava was a true visual stylist, and a generic description of his output just does not do the man justice. Thankfully, Troy Howarth keeps the plot synopsis for each movie short and spends more time discussing and analyzing each feature. Howarth points out the similar themes that run through Bava's work, and the author does this without being pretentious. This is a very well-written book, but it is still fairly accessible to the average reader.

Howarth is obviously a Mario Bava fan, but he avoids automatically proclaiming that everything Bava directed is pure genius. Almost every one of Bava's films had some sort of production difficulty, and some of them were basically wastes of Bava's talent. Howarth points out the strengths and weaknesses of each entry, and the author makes those who are familiar with Bava's films see them in a new light.

Most of the photos and stills in the book are in color, and many of them are very rare. Scattered throughout the volume are several pictures of Bava film posters (some more interesting than the movies they are advertising). This book is published by Midnight Marquee Press, and I'd like to point out the fine job that Midnight Marquee has done over the years in bringing out genre-related film books. THE HAUNTED WORLD OF MARIO BAVA has a nice, clean design, and Gary & Susan Svehla of Midnight Marquee should be proud of releasing this book.

THE HAUNTED WORLD OF MARIO BAVA has contributions from Lamberto Bava (Mario's son), Luigi Cozzi, David Del Valle, and Roberto Curti. Included in the book are vintage interviews with Mario Bava and a recent talk with Barbara Steele. There's also a chapter on the home video history of Bava's films by the author. This is a great idea, and it is one that I hope more film writers will attempt (after all, most viewers now experience older films for the first time at home).

Those who have experienced the film world of Mario Bava will enjoy this book the best. For those who are not well acquainted with the director or his movies, I would honestly say those people should watch Bava's work first before reading about it (BLACK SUNDAY would be the best film to start out with). Mario Bava is certainly not what one would call a "mainstream" filmmaker, and that is probably one of the reasons why he is held in such high esteem by so many film buffs. Troy Howarth has done a fine job celebrating the movie career of Mario Bava. The best compliment I can give to this book is that it made me want to see most of Bava's films again (and yes, I have most of them on DVD).