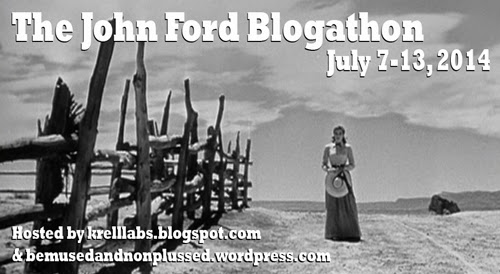 The legendary John Ford was a huge Civil War buff. He was fond of telling people that several of his ancestors fought in the conflict, and he even went so far to say that some of them fought on both sides. The Civil War is touched upon in a number of Ford's films, but it wasn't until 1959 that Ford directed a full-length theatrical feature with a Civil War story: THE HORSE SOLDIERS.

On the surface THE HORSE SOLDIERS would appear to have all the ingredients of a great epic historical film. It has a great director, two huge stars (John Wayne and William Holden), a script based on one of the Civil War's most interesting incidents, and location shooting in the very area where those incidents happened. The end result, however, is not considered among one of John Ford's best works.

THE HORSE SOLDIERS is based on a novel by Harold Sinclair. The novel was inspired by the feats of Union Colonel Benjamin Grierson, who in 1863 led a brigade behind enemy lines into Mississippi and Louisiana to damage Confederate supply lines. John Wayne plays Colonel John Marlowe, a character based on Grierson. The film starts with Marlowe being given his orders by none other than Ulysses S. Grant and William T. Sherman. As Marlowe prepares for the raid he is saddled with a truculent Army doctor, Major Henry Kendall (William Holden). From the very beginning Marlowe and Kendall start sniping at one another. We later learn that Marlowe has a thing against doctors because he watched his wife die on an operating table--but that explanation seems a bit contrived.

The antagonistic relationship between Marlowe and Kendall is one of the film's biggest problems. Both characters wind up looking like pouting kids instead of professional soldiers (as a matter of fact, the Duke comes off as a bit of a jerk throughout the entire picture). It is hard for the audience to get involved in the story when the two leading men come off as annoying. Holden had of course made several period films before THE HORSE SOLDIERS, but here he acts (and looks) like a man from 1959 instead of a man from 1863.

Another element of the screenplay of John Lee Mahin and Martin Rackin that seems contrived is the character of feisty Southern belle Hannah Hunter (Constance Towers), who Marlowe is forced to take along on the raid. Hannah Hunter is obviously one of those obligatory female characters that are placed into a male-dominated story. The role of Hannah seems almost tailor-made for Maureen O'Hara. Constance Towers is good in the part, and she is certainly attractive, but one has to wonder what THE HORSE SOLDIERS would have been like if Maureen O'Hara had been in it. At the very end of the film, Marlowe declares his love for Hannah. This is a development that comes totally out of left field, and as such doesn't make much of an impact.

What THE HORSE SOLDIERS does have going for it is the magnificent color cinematography of William Clothier. The movie looks fantastic, thanks to Clothier's work and the pictorial sense of Ford. Like most Ford movies, you could freeze-frame just about any scene and it would look like a painting. The location shooting in Mississippi and Louisiana certainly helps THE HORSE SOLDIERS look as authentic as possible.

This is a Civil War film that tries to pack in as much Civil War detail as possible. Not only do we get to see Grant and Sherman, the Andersonville prison camp is mentioned several times. We see railroad ties heated over a fire and twisted into knots, cavalry battles, deserters and bushwhackers, slave communities, and a amputation (there must be a rule that every Civil War film must have an amputation). THE HORSE SOLDIERS tries to be scrupulously fair to both the North and South, with the result being that the movie isn't as dramatic or moving as it should be.

The most remembered scene of THE HORSE SOLDIERS concerns Marlowe's command being attacked by the entire student body of a military cadet school. This sequence was based on a real Civil War incident during the Battle of New Market, in which students from the Virginia Military Institute took part.

The cast of THE HORSE SOLDIERS features several of John Ford's famed stock company, including Hank Worden, Ken Curtis, Jack Pennick, and Denver Pyle. One of the bit players was longtime stuntman Fred Kennedy. During the filming of THE HORSE SOLDIERS, Kennedy died while performing a horse fall. Kennedy's death devastated Ford, who lost interest in working on the rest of the film. One has to assume that if Kennedy had not died, Ford might have done more to make the film come out better.

THE HORSE SOLDIERS has been called a "minor" Ford film. Most "minor" Ford pictures are way better than the "great" films of others. The movie looks great, and it has many of the little Ford touches. In the background details it is probably one of the most accurate Civil War films ever made. Unfortunately the characters portrayed by John Wayne, William Holden, and Constance Towers veer toward generic Hollywood stereotypes.  THE HORSE SOLDIERS has all the makings of a great film, but it just doesn't quite get there. Ford biographers Scott Eyman and Joseph McBride have very few good things to say about it. John Ford would visit the Civil War again--he directed an episode of "Wagon Train" dealing with Ulysses Grant, and he directed the Civil War episode of HOW THE WEST WAS WON. But he never made a truly great full-length Civil War movie, and one wishes that he had. 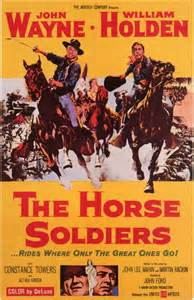