The Big Hurt On The Big Screen--MR. BASEBALL 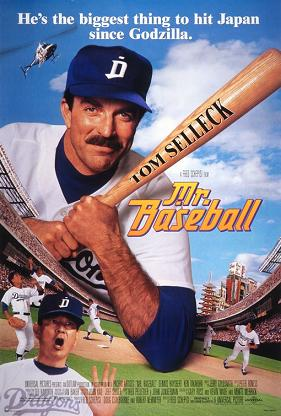 This weekend my favorite baseball player of all time, Frank Thomas, is being inducted into the National Baseball Hall of Fame. Frank was the greatest player in the history of the Chicago White Sox....but in his movie debut he wore a different uniform.

The movie that The Big Hurt appeared in was MR. BASEBALL (1992). The film stars Tom Selleck as grizzled veteran MLB player Jack Elliot, who is traded by the New York Yankees to a Japanese team.

MR. BASEBALL was one of a number of baseball-themed films made in the late '80s-early '90s. It's pretty formulaic--smart-aleck ugly American comes up against Japanese culture, and he learns some "life lessons" along the way. MR. BASEBALL is certainly no FIELD OF DREAMS, but it is mildly entertaining. It's the type of movie you watch on a rainy Saturday afternoon when you have absolutely nothing else to do.

As for Frank Thomas, he's in the very beginning of the story (which means you won't have to sit all the way through it if you just want to see him). He plays Ricky Davis, a hot-shot Yankees rookie gunning for Jack Elliot's job. Frank is only on-screen for about a minute, and he doesn't even have any dialogue. All he does is take batting practice--but it's enough to convince the Yankees (and the audience) that he's a better bet to make the team than the Tom Selleck character.

As a White Sox fan, it was cool to see Frank in a feature film--but it was also rather disconcerting to see him in a Yankee uniform (thankfully that never happened in real life). MR. BASEBALL has not been remade--yet. If it is....wouldn't it make sense to have new White Sox slugger Jose Abreu play Frank's role? 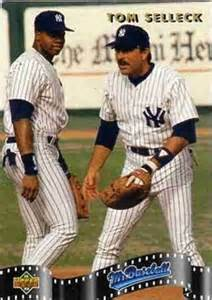