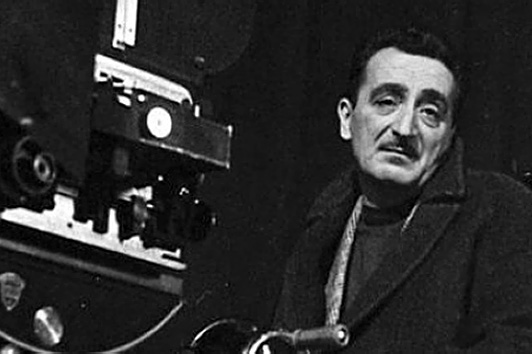 On this day exactly 100 years ago Mario Bava was born in Italy. Bava is best known for being a director of several stylish horror and thriller movies, but he was also a cinematographer, a special effects artist, and a screenwriter. Working in the less-regimented Italian film industry allowed Bava to develop an inventiveness that is sorely lacking in today's big-budget CGI spectaculars.

Mario Bava's films are unique due to the visual aspect that each one possesses. Bava was a master of light and shadow, and he used color like no one before or since. He also made one of the greatest black & white horror films of all time (BLACK SUNDAY). There's very few film directors that you can actually say had their own special look--and Bava is one of them. It's a look that has to be seen instead of read about...I certainly can't do it justice in a blog. Suffice to say that Bava had the ability to take what most would consider low-budget drive-in movies and turn them into examples of pure cinema.

In honor of Mario Bava's Centenary I present my own personal list of my five favorite Bava-directed films.

1. BLACK SUNDAY
An obvious choice, but it has to be. Bava's "official" directorial debut is a black & white macabre masterpiece. The movie made a genre icon out of leading lady Barbara Steele, and gave Bava a reputation that would follow him for the rest of his career. For those who are not familiar with Mario Bava's work, this is the movie you should start out with. Anyone who is a self-proclaimed classic horror film fan has to see BLACK SUNDAY at least once.

2. PLANET OF THE VAMPIRES
The ultimate Saturday matinee sci fi/horror film. A prime showcase for Bava's FX know-how, PLANET OF THE VAMPIRES was an inspiration for a number of more famous (and more expensive) genre films that appeared later on. This is one of the few movies where the alien planet really does look alien. A Blu-ray of this is scheduled to come out later this year.

3. DANGER: DIABOLIK
A year or so ago I wrote a blog listing my five favorite comic book films. I put DANGER: DIABOLIK on the list--and a lot of people thought I was crazy for doing it. A pure 1960s pop-art spectacle, with John Phillip Law as the title character and the stunning Marisa Mell (who's a special effect all by herself). DIABOLIK seems like a real comic book come to life. It also boasts one of Ennio Morricone's best music scores.

4. HERCULES IN THE HAUNTED WORLD
I know some people are going to shake their heads at that title, but this is full-tilt Bava all the way. The mighty Hercules has to venture into the Underworld to save his lady love from the hands of the dastardly Christopher Lee. A phantasmagorical feast, with one wild incident after another.

5. BLACK SABBATH
An anthology film featuring three impressive tales of terror. I know this might be heresy to some, but I prefer the American version of BLACK SABBATH--you get more Boris Karloff and you get to hear his voice. Whatever version you watch, you're going to get to experience some of Bava's greatest set-pieces.