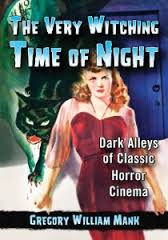 Greg Mank is the pre-eminent historian of the classic Hollywood horror film. His latest book is THE VERY WITCHING TIME OF NIGHT, published by McFarland & Company.

In this volume Mank devotes 13 chapters to what he calls dark alleys of classic horror cinema. Among the subjects are the sad life of DRACULA actress Helen Chandler, the making of Paramount's wild pre-code thriller MURDERS IN THE ZOO, and the production histories of CAT PEOPLE and THE CURSE OF THE CAT PEOPLE. We also encounter along the way tales about John Barrymore, Lionel Atwill, Boris Karloff, John Carradine, and Carl Laemmle Jr.

Most of the subjects in this book have been touched on by Mank before...but as usual with this writer there's always something new to be had, such as a forgotten incident that has been unearthed, or a fresh take on a film the reader thinks he or she knows all about.

The genius of Mank is that he gives each person he writes about a well-defined personality--making that person come alive as a real human being. Mank can also take the production history of the cheapest "B" monster movie and present it as an epic adventure in film making. Just about every monster movie fan knows the basic facts of the great horror films. Mank can take those facts (along with the dozens of new ones he seems to discover in every one of his books) and spin a story that gives you the feeling that the movies he covers are brand new--or at least need revisiting.

Mank's unique writing style--a combination of gossip, interviews, documented fact, and analysis--makes for entertaining reading. Mank clearly loves classic horror films, and that comes out in every page. You get the feeling that Mank himself is sitting in a room talking about monster movies with you personally.

It must be pointed out that some of the personalities featured in THE VERY WITCHING TIME OF NIGHT suffered as much horror off-screen as they did on-screen (Mr. Mank told me at this Summer's Monster Bash that he felt like he might have needed rehab after finishing the book). Despite that, this is not a depressing volume, simply because there is so much joy and affection for the classic horror genre and the men and women who contributed to it.

I must also point out that, as usual with any Greg Mank book, there's dozens of rare photos, most of which I've never seen before. How can there be any unpublished photos left of the likes of Karloff, Atwill, Carradine, etc.? Somehow Mank provides them.

Gregory William Mank has been one of my favorite writers since I first read his IT'S ALIVE! when I was a teenager back in the 1980s. This makes me rather biased when it comes to his work....but in all honesty no classic horror film fan can go wrong in obtaining a copy of THE VERY WITCHING TIME OF NIGHT.
Posted by Dan Day, Jr. at 1:24 PM