Book Review: THE LUCKY SOUTHERN STAR--REFLECTIONS FROM THE BLACK LAGOON 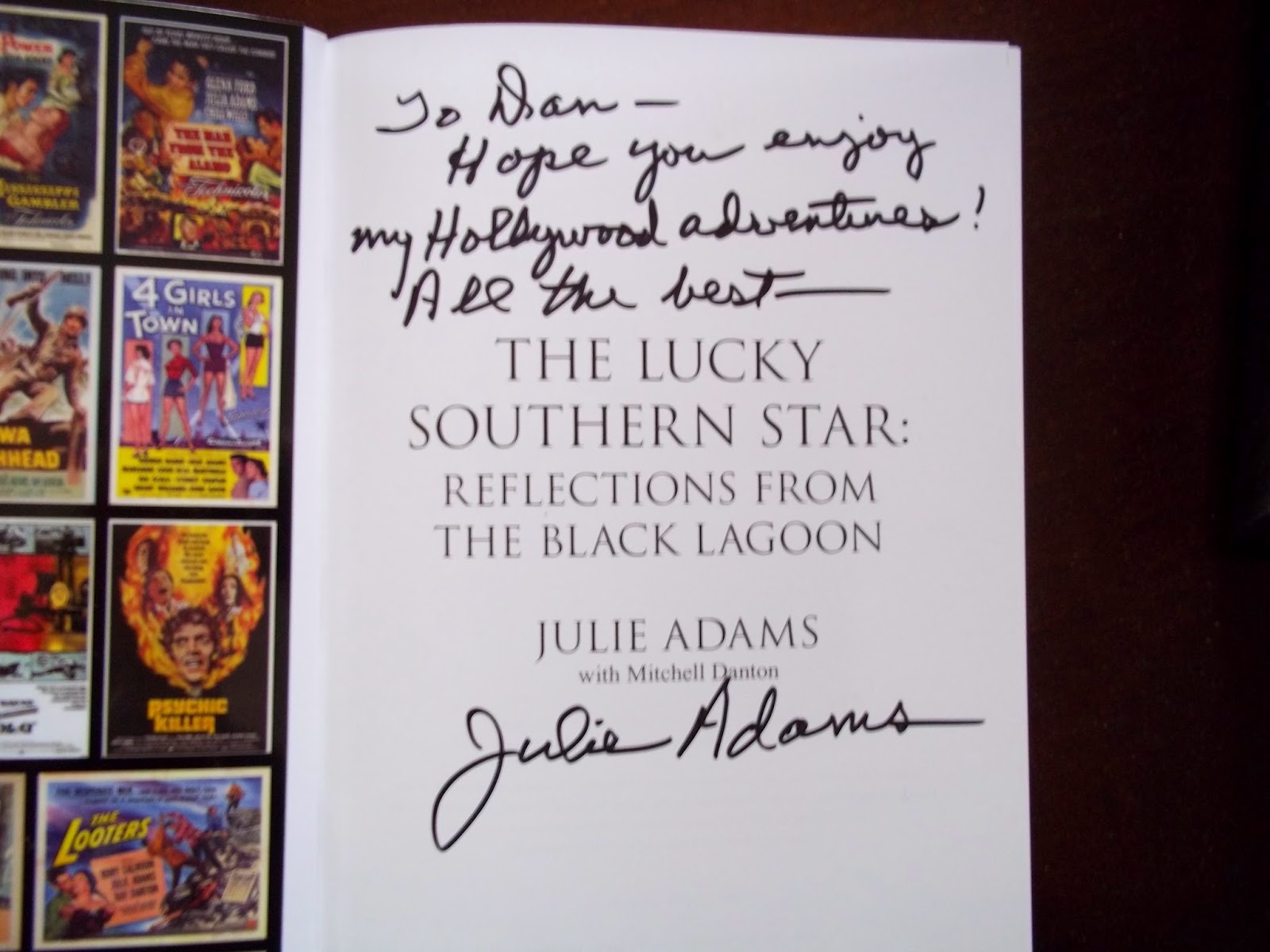 At Monster Bash this June not only did I get to meet actress Julie Adams, I also bought a copy of her autobiography. THE LUCKY SOUTHERN STAR--REFLECTIONS FROM THE BLACK LAGOON (co-written by Julie's son Mitchell Danton) is the story of a woman who has had an amazing professional acting career.

Adams starts out with her childhood in rural Arkansas during the Great Depression, and her dreams of becoming a movie star. Through her determination and attitude she broke into films in the late 1940s and soon afterward was signed to a contract to Universal Studios. While at Universal Julie appeared in some of her most well-remembered films, including of course CREATURE FROM THE BLACK LAGOON.

Julie devotes an entire chapter to BLACK LAGOON, and includes some very rare behind-the-scenes photos. Certainly her role in this film has made her something of an icon to monster movie fans....but if there is any genre Julie should be associated with it should probably be the Western.

Reading this book makes one realize there was far more to Julie Adams' career than one monster movie. Just a partial list of her leading men would include James Stewart, Rock Hudson, Tyrone Power, Robert Ryan, Charlton Heston, and even Elvis Presley. After leaving Universal Julie appeared as a guest star in some of the most famous TV shows of all time, such as "Bonanza", "Perry Mason", "The Andy Griffith Show" and "Alfred Hitchcock Presents". She even played a villain in an episode of "The Big Valley", where she tortured Barbara Stanwyck! In the 1970s Julie began playing various roles on the stage, while still continuing to do film and TV work. Her career continues into the 21st Century, with roles in such shows as "Lost" and "CSI:NY" and a cameo in Oliver Stone's WORLD TRADE CENTER.

This book is filled with dozens of stunning photos of Julie taken throughout her career. The inside covers contain color pictures of numerous posters of films that Julie appeared in. There is also a complete listing of Julie's film and TV credits.

If I had to sum up this book in one word, it would be "positive". The actress does not go out of her way to denigrate anyone, or tell any wild tales. If you are looking for any catty comments or juicy stories, you're not going to find them here. Some readers might be disappointed in this, but I personally think it is refreshing--and it is more than likely a major reason why Julie Adams has had such a long career in the entertainment industry.

In the epilogue of THE LUCKY SOUTHERN STAR Mitchell Danton explains that the real reason he wanted this book written was that he wanted people to know there was more to his mother's career than just CREATURE FROM THE BLACK LAGOON. He's absolutely right--the entire career of Julie Adams does deserve to be highlighted. Very few performers can boast a resume like hers.