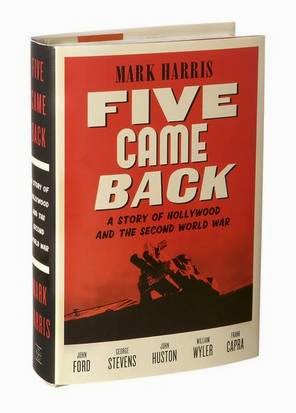 When the Japanese attacked Pearl Harbor on December 7, 1941, some of the Hollywood studios had already taken some tentative steps to make films that referenced what was happening overseas. But the film industry was just as disorganized and unsure how to proceed on a wartime footing as the rest of America was. Eventually the United States government and the country's Armed Forces realized that Hollywood's filmmakers could best be used in the production of training & propaganda movies.

All five of the directors featured in this book wanted to serve in the War, and Harris chronicles the sometimes chaotic process that each man went through to be involved in the conflict. The relationship between Hollywood and Washington D.C. was an uneasy one, and filled with a byzantine menagerie of committees, sub-committees, different levels of command, and conflicting orders. Today we take for granted the final results of World War II, and with such phrases as "The Greatest Generation" and "The Good War" thrown around, we assume that all Americans were fully united and smoothly working toward the same goal. Harris shows that in reality this was far from the case--each director covered in this volume had major disagreements with military & political higher-ups at various times.

There's a lot of information in this book I did not know. For example, I had read several times in other books and articles that Frank Capra's WHY WE FIGHT documentary series was an overwhelming success. According to Harris, Capra had to work hard just to get the films even finished--most of them were not even released in any form until the war was almost over--and most episodes did not receive major plaudits. I had also been lead to believe that John Huston's THE BATTLE OF SAN PIETRO was one of the greatest war documentaries ever made, but Harris discloses that most of the film was re-enacted. I also didn't know that William Wyler had his hearing severely damaged while filming footage on board a B-25.

What makes FIVE CAME BACK a great tale are "The Five"--each man a talented and complex individual in his own right. Each of these men could have chosen to stay in Hollywood, but they all went out of their way to give up lucrative and famous careers and serve their country. Each man was forever affected by the war, and after you get to the end of Harris' story you will admire these men for more than just being great movie directors.

Mark Harris did a huge amount of research for this book--the notes section is about 40 pages long, and the bibliography lists dozens of sources. As a movie and World War II buff, I couldn't help but be fascinated by FIVE CAME BACK. The story goes from the boardrooms of Hollywood to the corridors of America's capital and just about every place on the globe there was a major battle.
FIVE CAME BACK is one of the best movie books I have read in a while, and it will make a great holiday gift for anyone interested in history or classic film.
Posted by Dan Day, Jr. at 4:51 PM