THE LONG HAIR OF DEATH On Blu-ray 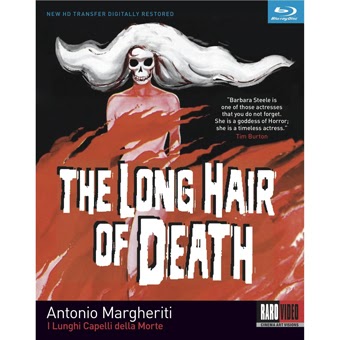 A company called Raro Video has recently released the 1964 Italian Gothic thriller THE LONG HAIR OF DEATH on Blu-ray. What makes this film noteworthy is the fact that it stars Barbara Steele and it was directed by Antonio Margheriti.

Antonio Margheriti is not as well known as fellow Italian filmmakers Mario Bava and Sergio Leone, but maybe he should be. Margheriti (who used the alias "Anthony Dawson" or "Anthony M. Dawson" on most of his works) made all sorts of movies familiar to those folks who like to stay up late. Some of his titles that might ring a bell include HORROR CASTLE (with Christopher Lee), CASTLE OF BLOOD (which also starred Barbara Steele), the bizarre science-fiction entries WAR OF THE PLANETS and WILD, WILD PLANET, and TAKE A HARD RIDE, a late European Western that featured Lee Van Cleef and Jim Brown.

Margheriti was far more prolific than his contemporaries Bava and Leone, and he worked in just about every genre of film imaginable. He may not have been a superb artist but he was an efficient director who turned out entertaining & interesting movies. He developed enough of a reputation to get his named used as an in-joke in Tarantino's INGLORIOUS BASTERDS.

As for Barbara Steele she needs no introduction. By 1964, the year THE LONG HAIR OF DEATH was made, Steele had already cemented her title as the Queen of Spaghetti Horror. Barbara Steele had something no other actress had--a face that could look alluring and creepy at the same time. THE LONG HAIR OF DEATH takes full advantage of Steele's iconic persona.

The movie's story is set in Europe during the late 15th Century. A woman is accused of murdering the head of the powerful Humboldt family, and is sentenced to be burned as a witch. The woman's oldest daughter Helen (Barbara Steele) begs the new Count Humboldt to save her mother. Helen gives herself to the Count, but her mother is burned to death regardless. Before her death the woman curses the entire village and the Humboldts. Helen is later killed by the Count, and years later Helen's younger sister Elisabeth (Halina Zalewska) is forced into marriage with the Count's dissolute son Kurt (George Ardisson).

Soon after the wedding the village is struck with plague. During a service in the Humboldt castle's chapel, a young woman who looks exactly like Helen wanders in. The woman, who calls herself Mary, is allowed to stay in the castle and Kurt becomes infatuated with her. Mary has her own special plans, however, and soon Kurt has to pay for his sins.

THE LONG HAIR OF DEATH has almost all of the ingredients of a black & white Gothic tale. There's a curse, a noble family who ruins the lives of those around them, a large and imposing castle with an underground crypt, and a secret passageway behind a fireplace (shades of Mario Bava himself). The movie has several scenes of characters wandering around the castle in the middle of the night while holding candles (and of course the females are always wearing nightgowns while doing this). THE LONG HAIR OF DEATH has more atmosphere than pure horror--this movie could play on prime time TV with no problem. The plot is pretty thin for a 94-minute tale....if you've seen enough of these types of stories you can easily guess what is going to happen. Having said that, Margheriti's stylish direction draws the viewer into the film, and there's nothing wrong with spending a lot of time looking at the leading ladies. The bombastic music score was written by Carlo Rustichelli (who also worked with Mario Bava), and the composer lays it on rather thick.

While watching THE LONG HAIR OF DEATH, I was reminded of Roger Corman's THE MASQUE OF THE RED DEATH and THE TOMB OF LIGEIA, and the climax reminded me of THE WICKER MAN. THE LONG HAIR OF DEATH is not on the same level as Bava's BLACK SUNDAY, or maybe even Margheriti's own CASTLE OF BLOOD, but it is a fine representation of Italian Gothic cinema, and a prime showcase for Barbara Steele. Once again Steele plays a dual role (or at least a role where she is pretending to be something she's not), and once again her incredible presence says more than a hundred lines of dialogue could.

THE LONG HAIR OF DEATH has been available for years as a public domain title. This Blu-ray is way beyond any other versions. The picture quality is so sharp a viewer can make out what looks like a fine mist falling during a scene where Barbara Steele swears revenge next to her mother's ashes. The sound is full and clear. The movie is presented on this Blu-ray in anamorphic 1.85:1 widescreen. There are two audio options--Italian and an English dub (the English dialogue matches almost exactly with the English subtitles).

The Blu-ray comes with an 8-page booklet featuring stills and a essay on the film by Fangoria editor Chris Alexander. Alexander is apparently the greatest THE LONG HAIR OF DEATH fan of all time--he simply rhapsodizes over the production, and Barbara Steele in particular. Alexander also is included on a short video featurette, where he basically repeats what he wrote in the booklet. He does get in a good phrase when he mentions Barbara Steele's "cruel beauty" (if anyone ever writes a biography of Steele, that's the title they should use for it). There's also a 10 minute interview with Antonio Margheriti's son Edoardo, in which he gives a brief overview of his father's career. Screen writer Antonio Tentori gives a short video essay where he also gushes about the film. A Italian trailer and a English trailer round out the extras.

I've never bought a disc from Raro Video before--I have to admit I had never even heard of the company before. But after this impressive Blu-ray, I'm certainly going to keep track of what they have in store for the future. For a rare, low-budget 1960s Italian horror film, THE LONG HAIR OF DEATH looks terrific on this Blu-ray. Barbara Steele looks terrific here as well--she's pure Gothic eye candy. This Blu-ray is well worth seeking out, if you enjoy this type of film.