Book Review: FANTASTIC FILMS OF THE DECADES--Volume 1: The Silent Era 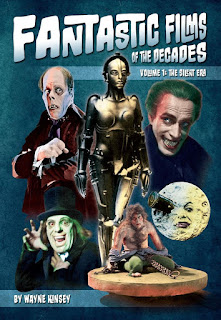 Peveril Publishing is committed to producing high-end collectible books that focus on the film genres of horror and science-fiction. I have two books from the company--THE PETER CUSHING SCRAPBOOK, which I wrote a blog post on in June 2013, and HAMMER FILMS ON LOCATION, a must-have for any true fan of that British company.

Now Peveril and author/film expert Wayne Kinsey have started a new series on the history of fantastic films in the 20th Century. The first book in the series is FANTASTIC FILMS OF THE DECADES--Volume 1: The Silent Era.

Wayne Kinsey explains in the introduction that although just about all the information in this book can be found on the internet, there's just something special about holding a great book in your hands--and he's right. Volume 1 of FANTASTIC FILMS starts out at the very beginning of cinema and ends at the dawn of the sound era. Several films are covered in depth, such as the usual suspects like METROPOLIS and PHANTOM OF THE OPERA and the not so famous such as GO AND GET IT and THE HEAD OF JANUS.

Kinsey reveals numerous factoids about each feature, and also gives his own opinion on various films. This book is chock full of great stills and poster reproductions, some of them in color.

This volume is also filled with sidebars concerning prominent actors, directors, and other personnel who were important during this era of fantastic film.

As usual with Peveril product, the book has a clean, sharp, easy-to-read design.

I believe that this first volume to FANTASTIC FILMS would be a great gift for a young adult who may have some interest in classic film. Just about all the information you need on horror and science-fiction films of this period is contained in this book. But even if you already have an encyclopedic knowledge of silent fantastic cinema, you would appreciate this being part of your collection.

This book is limited to only 500 copies and is available only through Peveril Publishing (http://peverilpublishing.co.uk/).