The 80th Anniversary Of BRIDE OF FRANKENSTEIN 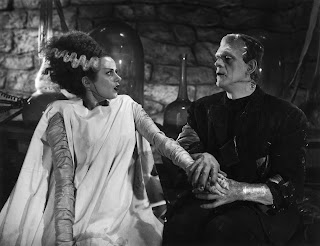 This year marks the 80th anniversary of the original theatrical release of BRIDE OF FRANKENSTEIN. A couple weeks ago at Monster Bash, I was privileged to listen to esteemed classic film historian Gregory Mank give a talk on the making of the film.

Only James Whale would be audacious enough to open the movie with a scene featuring the woman who actually wrote Frankenstein, Mary Wollstonecraft Shelley herself, along with Percy Shelley and Lord Byron. The irony of having Elsa Lanchester play both Mary Shelley and the Bride of Frankenstein is fairly obvious, but in this picture it makes perfect sense. (By the way, Gavin Gordon as Byron all but steals the film.) Lord Byron convinces Mary Shelley to continue the tale of Frankenstein and his Monster, and so the "real" story begins.

The tale picks up right where the 1931 FRANKENSTEIN left off, and soon the Monster (Boris Karloff) is back in action. The next time you watch BRIDE OF FRANKENSTEIN, notice how Jack Pierce slightly changed the Monster's makeup to reflect his being burned in the windmill--one of the many little touches that makes this film so great.

Henry Frankenstein (Colin Clive) is also recovering from his bout at the windmill--but he's soon persuaded to go back to monster-making again by his old mentor Dr. Pretorius (Ernest Thesiger). The character of Pretorius is one of the most legendary supporting roles in Hollywood history, and Thesiger is simply astounding (if they had given Best Supporting Actor Academy Awards at the time, he certainly should have won one).

While Pretorius schemes to have Henry join him in an unholy alliance, the Monster winds up at the hut of an old hermit (O. P. Heggie). The Monster learns from the hermit how to talk, drink, and smoke....and he is even brought to tears by the hermit's friendship. Of course, the Monster's idyll is shattered by pesky villagers (one of them played by none other than a very young John Carradine). The Monster makes his way to the local cemetery, where he encounters Dr. Pretorius robbing graves. Pretorius tells the Monster that he wishes to create a mate for him. The ghoulish duo convince Henry Frankenstein to help by kidnapping Henry's wife Elizabeth (played in this film by Valerie Hobson). What follows is one of the great climaxes in movie history, and the introduction of one of the great images in movie history, the Bride herself.

I apologize for my rather simple story synopsis, but no written recitation of the plot can give the proper impression of BRIDE OF FRANKENSTEIN. Everything in the entire movie is heightened to another level, from the florid performances to the quotable dialogue (which I know just about every line of). There are no "ordinary" characters in BRIDE, or "ordinary" line readings. Some consider BRIDE to be "camp", and the movie's detractors (and there are some) use that term as a criticism. I don't look at BRIDE as being camp so much as it being a movie which deserves its own genre--maybe it should be called "Whalesian"??

Even when I first saw BRIDE as a kid I knew there was something different about it, something that made it stand out. It is unlike any other film. There really isn't nothing to compare it to--even all the other Universal Frankenstein films. It is totally unique and that may be the real reason why I love it so much.

I've already mentioned actors Gavin Gordon and Ernest Thesiger, but BRIDE is filled with plenty of other standout performances, including Una O'Connor as the rather emotional Minnie (she has plenty of detractors as well, but I'm not one of them), E. E. Clive as the pompous Burgomaster, O. P. Heggie's moving and kindly hermit, and the one and only Dwight Frye, who this time around plays a really nasty looking murderous grave robber named Karl.

And oh yes, there's Boris Karloff as the Monster. What more can you say about Karloff in this role? No matter how many times I see this film, I can't helped but be moved by him. Greg Mank has written many times on how Karloff disagreed with the Monster learning to speak (let alone drink and smoke), but here it seems like a natural progression. You may laugh with the Monster during his time of "learning" with the hermit, but you certainly don't laugh at him. Karloff as the Monster has far more emotional range than any big time movie star in a "normal" role.


Let's not forget the Bride. It's amazing how much impact Elsa Lanchester had in the role, considering that the Bride doesn't really become "alive" until almost the very end of the film. A lot of that impact has to do with the look of the Bride (once again the genius of Jack Pierce needs to be mentioned), but Lanchester's unnerving body language, and that horrible screech, makes the Bride iconic.

For such a legendary film, BRIDE OF FRANKENSTEIN has a rather short running time--75 minutes. According to Greg Mank, nearly 17 minutes of scenes were edited out before general release. Among the cuts was an entire subplot featuring Dwight Frye's Karl causing havoc on his own and blaming it on the Monster. At Monster Bash I took the opportunity to spend a couple minutes with Mr. Mank and ask him a question that I have long been pondering--If BRIDE OF FRANKENSTEIN had not been edited down, would it still be considered the classic that it is today? We both agreed that BRIDE is fine just the way it is. Classic monster movie fans dream of seeing these edited scenes--and I would love to see them too--but I think that they would have been a distraction to the main story at hand. Let's face it--for a 75 minute movie, BRIDE has plenty of highlights in it already.

I could go on and on and on about BRIDE OF FRANKENSTEIN. There's so many things about the movie I haven't even touched on yet--Franz Waxman's superb score (which Universal reused over and over again), the scene where Pretorius shows off his little "creations", the photography by John Mescall, the art direction by Charles D. Hall...but I think the best way to wrap up this blog is to discuss the scene that for me makes the biggest impact.

It is the scene where the newly re-born Bride is introduced to the Monster...and she lets out that horrible screech.

Any person who has a heart cannot help but be cut to the quick by the Monster's statement. It proves that in a film filled with eccentrics, the Monster is the only character that is truly human. We have all been rejected, we have all been hurt, and we have all felt alone. We are all the Monster in some way. Underneath all the outlandish goings on, James Whale fashioned a tale about a lost soul trying to find acceptance. That is why BRIDE OF FRANKENSTEIN lives on...it truly is alive.