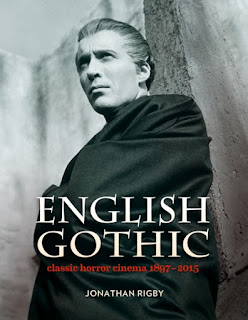 At that time there was very little information on classic horror films--this was way before the internet. Whatever books on classic monster movies happened to be at any of my local public libraries, I checked out over and over again. When I became a teenager and then got a job, I was able to buy genre magazines such as Cinefantastique, Filmfax, and later Scarlet Street, Monsters From the Vault, and Video Watchdog.

While there was plenty of information on the Universal horrors of the 1930s and 1940s, there was little to none on Hammer and other British horror features. In the 1980s those films were still looked on by many as gory trash. What books and articles I could find about Hammer at that time were very patronizing toward the company, and it was very obvious that most of the writers who did discuss the films had not actually seen them.

Things improved a bit in the 1990s--that's when I started reading Richard Klemensen's seminal Little Shoppe of Horrors--but the ultimate book on the great British Gothic horror film period had yet to be written.

When I bought a copy of Jonathan Rigby's ENGLISH GOTHIC in 2000, it was a revelation. Here, finally, was the book I and many other classic horror movie fans had been waiting for. A revised new edition of it has just been released by Signum Books.

What sets ENGLISH GOTHIC apart is the fact that the author is a fan, and a frequent viewer, of the films discussed. (It would seem obvious that if you were going to write about certain movies, you would make a point of seeing them...but trust me, as someone who has read hundreds of movie books, I can assure you that is not always the case.) Jonathan Rigby has a love and appreciation for the genre, yet he is able to write articulately about these films without coming off as a reactionary fanboy. Rigby lays out a foundation for English Gothic existing long before the heyday of Hammer Films. The course of the English horror film is charted here in chronological order--this may seem like a small detail, but it allows Rigby to discuss certain films in the context of when they were made and in comparison to other horror films made at the same time. This is much better--and much more interesting--than the usual grouping of films by company or subject that most books feature.

This chronological tour of British horror also enables Rigby to touch upon the status of the British film industry in general, and the sociological history of Britain in the late 20th and early 21st centuries.

The best part of the book is of course the chapters covering the "glory years" of British horror, from 1954-1975. In these chapters the author takes a special look at 100 films, including most of the famed Hammer product and even some little-known efforts that some readers may not be aware of.

I must point out that this is not just a book on Hammer Films. Many of the films featured in the book are not from that company. Rigby deals with films from Amicus, Tigon, Anglo-Amalgamated, etc. When one reads ENGLISH GOTHIC one gets an appreciation for how huge--and how eclectic--the British horror film boom really was.

Rigby covers the fall of the English Gothic film in the late 20th Century, and in a brand new chapter reviews what could be called a mini-boom of the genre in the first decade of the 21st Century. (The author does ruefully admit that few of the numerous 21st Century titles have received any type of major release, and even fewer of them have made any impact with the average moviegoer.)

There is also a appendix on English Gothic television, and some of these programs sound more interesting than the more famous films.

The book is filled with magnificent black & white stills, and there are two color sections in the book. It retains the same design as the other editions of ENGLISH GOTHIC.

I would assume that those who are interested in this subject already have an earlier copy of ENGLISH GOTHIC. Is this new edition worth buying? I would unhesitatingly say yes. This edition is in hardcover, with a stunning cover photo of Christopher Lee as Dracula (see image above). The book goes all the way up to 2015 with the recent release THE WOMAN IN BLACK: ANGEL OF DEATH included. Rigby knows the subject backwards and forwards, and his writing style is entertaining and informative. ENGLISH GOTHIC is the book on the British Gothic horror film.
Posted by Dan Day, Jr. at 5:29 PM