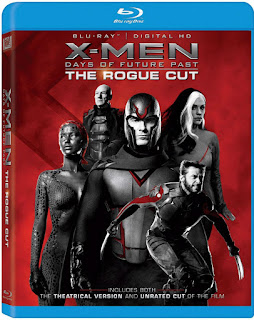 When one thinks about it, the first film in the series, X-MEN (2000), is one of the most influential pictures of the last twenty years. It was influential due to the fact that it proved a comic book film not featuring Superman or Batman could be made and be successful among critics and audiences. If X-MEN had turned out badly, it's highly doubtful that the Spider-Man or Iron Man franchises would have been attempted.

X-MEN grounded its many characters in a realistic world, and made these characters accessible to both regular moviegoers and comic geeks (not an easy thing to do). It helped that director Bryan Singer was able to assemble an amazing cast....and of course one member of that cast became a breakout star in his own right playing the Wolverine--Hugh Jackman. (Perhaps the only other actor who has done as well as Jackman has playing a comic book hero in multiple films is Robert Downey Jr. as Tony Stark.)

Many consider X-2: X-MEN UNITED to be even better than the first, and it at least has to be considered one of the best sequels ever made. X-MEN: THE LAST STAND gets a lot of grief from fans, but I think that is because the movie just doesn't live up to the first two films--THE LAST STAND isn't really that bad (at least I don't think it is).

X-MEN ORIGINS: WOLVERINE also gets some grief....but for the purposes of this blog post I'm not going to count that and THE WOLVERINE as true X-MEN movies. So that lets me jump over to X-MEN: FIRST CLASS, a kind of "re-boot" that took the bold step of going into the past and recasting many of the characters, yet at the same time still using all the X-Men movie history that had been laid down before. I was a bit skeptical about FIRST CLASS, but I would up loving it.

So now we finally get to X-MEN: DAYS OF FUTURE PAST, which was released in theaters last year. Now we get a special Blu-ray edition of that film with a different version than the theatrical cut.

This "Rogue Cut" of DAYS OF FUTURE PAST is about 17 minutes longer than the original version. As soon as DAYS OF FUTURE PAST was released to theaters there were internet rumors about a sub-plot featuring Anna Paquin as Rogue being cut out of the film. That sub-plot has been restored, along with more scenes with Jennifer Lawrence as Mystique and a few odds and ends.

Is this "Rogue Cut" must-see material? Well, for me, personally, DAYS OF FUTURE PAST was fine exactly the way it was. Original X-Men director Bryan Singer scored a major coup in pulling off a multi-generational X-Men (and Women) team-up. In my opinion it is one of the best comic book movies ever made. Having the Wolverine act as the "bridge" between the two generations of X-Men is a great concept, especially since the Wolverine is usually portrayed as a lost, loner type. In this film the Wolverine has to be the "leader", so to speak. It is to Hugh Jackman's credit that his playing of the Wolverine has never seemed boring or one-note--he is still able to make the character fresh and appealing, even after doing it for 15 years.

What really made X-Men movie fans happy was that the ending of DAYS OF FUTURE PAST cleared the decks and righted the ship, story wise. (I do have to point out that the next film in the series, X-MEN: APOCALYPSE, is supposed to be set in the early 1980s, which means the series continuity will probably get all screwed up again.)

The Rogue Cut is an interesting variation on DAYS OF FUTURE PAST, but I honestly don't think it improves the film very much. The much-ballyhooed sequence with Anna Paquin's Rogue appears tacked on, even though it is explained in the Blu-ray's extras that the sequence was supposed to be in the film in the first place. Cynics will say that the whole point of the Rogue sequence was for Fox to come out with another version of the film for people to buy (and this guy bought it).

This Blu-ray has a 52-minute featurette on the making of the film, with input from just about all of the important members of the cast and crew. It's informative, but it does veer a bit into the "This is the greatest project I've ever worked on!" publicity-fluff territory. There's a photo gallery and commentaries, but the best thing about the Blu-ray is that you get the theatrical cut of DAYS OF FUTURE PAST as well.

If you do not own DAYS OF FUTURE PAST on home video and you want to get it, this is the version to buy. If you had already bought the movie when it first came out on Blu-ray, you might be ticked off that this new version has been released. If you are a huge fan of the X-Men movie franchise I would say yes, you should buy this Blu-ray. Besides, there's nothing wrong with seeing more of a naked blue Jennifer Lawrence.
Posted by Dan Day, Jr. at 6:26 PM