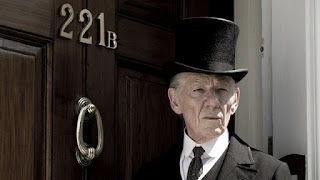 The star and director of GODS AND MONSTERS, Ian McKellen and Bill Condon, re-unite for a look at an elderly Sherlock Holmes in MR. HOLMES.

This movie, based on a novel by Mitch Cullin, is set in 1947 England, where a 93-year old Sherlock Holmes keeps bees on a farm in Sussex. The great detective has just come back from a trip to Japan, and he is determined to finish writing an account of his last case. His determination is based on the fact that his memory is failing, and also that the case had such serious repercussions on Holmes that he wound up retiring from solving any more mysteries.

If you are looking for a Robert Downey Jr. or Benedict Cumberbatch Holmes, you're not going to find them here. You also will not find any Jeremy Brett-style histrionics. MR. HOLMES is a stately character study, with Ian McKellen playing a aging genius who has become aware that not only is his health failing, but his entire life may have been without meaning. McKellen gives a magnificent, moving performance, helped by some excellent old-age makeup.

In support of McKellen are Laura Linney as Holmes' housekeeper, a WWII widow, and Milo Parker as her young son. Holmes forms a bond with the young boy, much to his housekeeper's jealousy and consternation.

Throughout the movie Holmes has various flashbacks to his last case, set during the late 1910s. McKellen looks perfect in period costume and one wishes the actor had been given a chance to play Holmes in his younger days.

It's rather strange that MR. HOLMES was given a summer release--this movie has more of an "autumn" feel to it, and I mean that in a film business sense (the English locations are splendidly green). I assume the producers were hoping that some Magneto and Gandalf fans might be induced in seeing it.

If you are looking for an antidote to comic book heroes and Frozen Minions, MR. HOLMES will be just what you need. Even if you are not particularly interested in Sir Arthur Conan Doyle's famous creation, I suggest you see this film for the express purpose of experiencing one of the greatest actors of our times engaging in his craft.


NOTE: Do you remember YOUNG SHERLOCK HOLMES? Well, the young man who played Holmes in that film, Nicholas Rowe, has a cameo in MR. HOLMES....I won't tell you what it is, but I think you'll be able to figure it out.
Posted by Dan Day, Jr. at 5:51 PM