Seeing Ian McKellen in MR. HOLMES has inspired me to write a post on my favorite portrayals of Arthur Conan Doyle's famous detective. I have limited myself to five choices, and I have included portrayals from television.

Without a doubt Basil Rathbone is THE Sherlock Holmes. Especially in the first two films he made in the role--THE HOUND OF THE BASKERVILLES (1939) and THE ADVENTURES OF SHERLOCK HOLMES. Both of those movies were set in the proper Victorian period, and faithful to Doyle's conception of the character. Rathbone and his Watson, Nigel Bruce, would go on to make 12 other movies, but these were set in the contemporary 1940s. The "Universal 12", as they are called, really qualify more as "B" type films instead of prestige productions. Nevertheless, most of them are still entertaining. Rathbone's Sherlock movies were shown constantly on TV when I was a kid, and I'm sure their constant repetition is one reason why so many people even today believe Rathbone was the perfect Holmes. The fact is, Rathbone was perfect--in looks and demeanor. If you have seen any of the original Sidney Paget drawings of Sherlock Holmes for Strand magazine, you may have noticed how many of them uncannily resemble Rathbone. The actor eventually would tire of Holmes, and become disappointed that many only saw him as the great detective and nothing else--but let's face it, Rathbone is to Holmes as Bela Lugosi is to Dracula or Charles Laughton is to Henry VIII.

Of course I'm going to have Peter Cushing on this list. I've mentioned on this blog before that Cushing's portrayal of Holmes in Hammer's 1959 THE HOUND OF THE BASKERVILLES is one of his greatest performances. Jeremy Brett usually gets credit for being the first "modern" Holmes--but I think Cushing beat him to that by about 25 years. Cushing meticulously studied Sherlock Holmes, and the actor himself was something of an expert on the character. Cushing would later play Holmes for BBC TV in the late 60s, and one more time in a British 1984 TV movie, THE MASKS OF DEATH.

When Britain's Granada Television began producing adaptations of Conan Doyle's Holmes stories in the mid-1980s, the actor who played the detective, Jeremy Brett, caused a sensation. Brett's Holmes was like nothing seen up to that time--he was doggedly faithful to the Doyle writings, yet at the same time his take on the role had different unexpected twists and shadings to it. The first couple seasons of the Granada TV series are as authentic as anything ever filmed based on Conan Doyle, but soon the series starting changing the stories as much as possible, and Brett's Holmes became more and more bizarre. Brett's behavior was mostly the result of the actor's physical (and mental) debilities, but that was no excuse for the program to veer so far off the format. All things considered, Jeremy Brett, at his best, was a magnificent Holmes, and he brought the character to the attention of a new audience.

Is it too soon to put him on this list--especially since he has played Holmes only once? Well, this is my personal list, and I loved his elderly Holmes. I kind of wish that MR. HOLMES had been released in the fall--it is not a summer type of movie, and it may go without the notice it--and McKellen--deserves.

This pick may surprise a lot of folks. British actor Robert Stephens played Holmes in Billy Wilder's THE PRIVATE LIFE OF SHERLOCK HOLMES. That film has a cult following built around it, mostly due to the now-legendary status of the film's original three-hour cut. If you have never seen THE PRIVATE LIFE OF SHERLOCK HOLMES, it's almost impossible for me to describe it to you. Is it satire? Light comedy? A Billy Wilder pet project run amuck? No matter how you describe it, THE PRIVATE LIFE OF SHERLOCK HOLMES is one of the most unique movies ever made. It wasn't a hit with viewers or critics when it came out in 1970, and because of that Robert Stephens' performance hasn't gotten a lot of respect. I think he is very good in Wilder's interpretation of Holmes. Stephens gives a Holmes a caustic demeanor that hides a lonely, fragile man underneath. Stephens (and Wilder) show a Holmes who is a human being, not a unfeeling thinking machine. If you haven't seen THE PRIVATE LIFE OF SHERLOCK HOLMES you really should--the movie has magnificent art direction & production design, sumptuous photography, and a hauntingly beautiful music score by Miklos Rozsa. (And I have to mention Christopher Lee's knockout performance as Mycroft Holmes, who in this film really is Sherlock Holmes' smarter brother. Lee would cross paths with the world of Sherlock Holmes many times during his career.)

If you are wondering why Benedict Cumberbatch is not on this list...well, that's because I've never seen his TV Sherlock. I'm sorry, but I just can't wrap my head around a 21st Century Holmes, no matter how hip and trendy he may be. Besides, anyone who reads this blog regularly knows that I am the least hippest and trendiest person in the world.

Are there any Sherlocks that I should have mentioned? Feel free to leave your personal favorite Sherlocks list in the comments section. 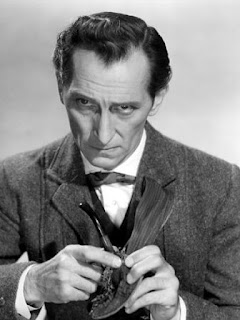