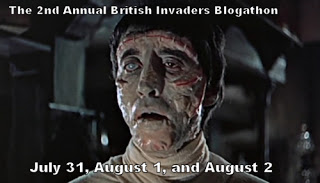 Does the 1969 movie WHERE EAGLES DARE qualify as a British film? Well, the man who is running this blogathon says it does. Most of the film was shot at MGM's British Studios in Borehamwood, England. Much of the cast & crew of WHERE EAGLES DARE were British.

But more importantly the movie is part of a sub-genre of films in the 1960s that dealt with British military operations in World War II. These movies were often major epic productions, and they usually had at least one major American star. Other titles that belong in this sub-genre include THE GUNS OF NAVARONE, THE GREAT ESCAPE, and OPERATION CROSSBOW.

WHERE EAGLES DARE was initiated by producer Elliot Kastner, who personally contacted adventure novelist Alistair MacLean and asked him to write an original screenplay, which the author had never done. MacLane was intrigued enough to agree to the project.

Kastner wanted the story to be set during WWII and to be in the manner of THE GUNS OF NAVARONE, which was based on a novel by MacLean. Kastner then approached Richard Burton to star in the film. The story goes that Kastner convinced Burton to be in the project by telling the actor that it was a movie that Burton's children could see (apparently Burton wasn't too worried about his kids seeing dozens of people shot and blown up). After getting Burton on board, Kastner was able to attract MGM into making the film.

The story concerns a group of British commandos, and one American Army Ranger (Clint Eastwood), who are tasked with retrieving a captured American general from a forbidding medieval castle, the Schloss Adler, which is located in southern Bavaria. If that isn't dangerous enough, the castle is perched high on an Alpine mountain, and the village below is home to a German army base.

Being that this is a Alistair MacLean story, there's more to the mission than meets the eye. WHERE EAGLES DARE features a number of twists and turns, and many of the characters are leading double lives.

The production made use of a real medieval castle located near Werfen, Austria. Much location shooting was done in the Austrian countryside and at a nearby cable car track. The use of these real-life locations gives WHERE EAGLES DARE an authentic "feel" that one doesn't get from the CGI blockbusters of today, despite the fact that the movie's story is WWII-based fiction.

WHERE EAGLES DARE may not have any CGI, but it does have a catalog of practical special effects and outstanding stunt sequences. The movie truly is an epic production, with an amazing cable car station set that one would think on first viewing was the real thing. Many of the shots of Schloss Adler are actually that of a large-scale model (the real castle featured in the film did not have a cable car line running to it). The combination of models, matte paintings, and detailed sets makes the castle formidable enough to serve the story's needs.

The stunt sequences are still amazing to this day (the second unit director on the movie was none other than Yakima Canutt, probably the most famous stuntman who ever lived). The cable car sequences--in which various stuntmen rode on top the cars, hundreds of feet up in the air--are breathtaking. Obviously Richard Burton and Clint Eastwood didn't ride the cars (seeing WHERE EAGLES DARE on DVD or Blu-ray makes that more obvious), but that doesn't take away from the fact that these sequences are a major highlight of action cinema. The stunt crew also had to climb up-and down--the walls of the real castle. The major stunt performers on WHERE EAGLES DARE were Alf Joint, Joe & Eddie Powell, and Gillian Aldham, who doubled for female lead Mary Ure.

WHERE EAGLES DARE clocks in at two and a half hours long, but there's so much action going on, and so many plot twists, that one never feels bored. There are some scenes where Richard Burton does appear to be bored, but once his character is given a long scene "explaining" the plot, the actor's brilliant way with dialogue gets a chance to shine. Clint Eastwood doesn't really have much to do here except kill people--his line of dialogue to Germans shot ratio has to be about 1 to 100--but WHERE EAGLES DARE proved that he could star in a big-budget action film as well as a Western. (Eastwood has been quoted as saying that he killed so many Nazis in this movie, he never understood why the war took so long to end.) Adding to the British feel of this film is the number of adept U. K. character actors present, including Patrick Wymark, Michael Horden, Donald Houston, and Derren Nesbitt. Representing the German side are Anton Diffring (who played dozens of German military officers in his screen career) and Ferdy Mayne.

One major supporting role that requires attention is that of Heidi, an Allied agent working as a barmaid in Werfen. The voluptuous Ingrid Pitt plays Heidi, a year before she would acquire everlasting cult fame as Carmilla in Hammer's THE VAMPIRE LOVERS. Ingrid makes such a big impression in WHERE EAGLES DARE that poor Mary Ure, who is the actual female lead in the film, gets very little attention for her part in it. 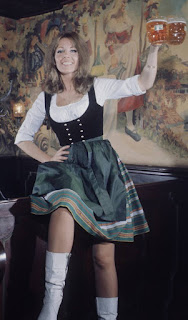 
WHERE EAGLES DARE became a hit for MGM when first released, and it plays on TV constantly (it always seemed to be on when I was a kid in the late 70s and early 80s). The movie now has a major following among film buffs....so much so that the standout film magazine Cinema Retro has published not one, but two special editions totally devoted to the film. Much of the information in this blog post comes from these outstanding magazines. If you really love WHERE EAGLES DARE, you owe it to yourself to get a copy of one of these issues--they are not just filled with information, they also have hundreds of great photographs concerning the film. 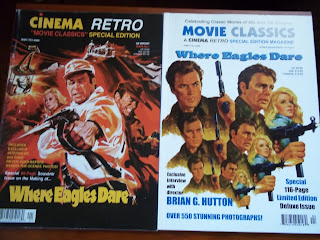 The reason I picked WHERE EAGLES DARE for The British Invaders Blogathon is that I believe the movie has a very old-fashioned "Let's get on with it, lads" British attitude. There's no soul-searching conversations about the futility of war or the nature of killing, and despite people being killed left and right, no one seems too broken up about it. Throughout all the mayhem and destruction, Burton and Eastwood remain concentrated on the job at hand, and they never question the point of what they are doing. 21st Century political correctness plays no part in WHERE EAGLES DARE--it is a pure action-adventure spectacle all the way, and a entertainingly well-made one, at that. Director Brian G. Hutton (a native New Yorker) was very young when he made this film, and he had never made anything on its scale before. Despite that, WHERE EAGLES DARE is considered by many one of the great World War II adventure epics, and it still has a huge fan base....particularly in England. 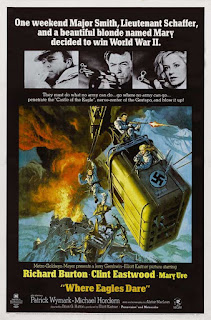