The Anti-Damsel Blogathon: Frieda Inescort In THE RETURN OF THE VAMPIRE 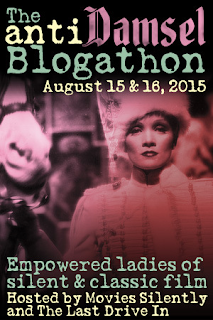 The Anti-Damsel Blogathon is a celebration of empowered women in classic film history--and there are a lot more of them than most people generally assume. It is my belief that movie actresses had a far better range of roles available to them in the '30s and the '40s than they do today.

When it comes to classic horror films, you will find way more examples of damsels instead of anti-damsels--but there are exceptions. One of the biggest is the role of Lady Jane Ainsley in the 1943 Columbia thriller THE RETURN OF THE VAMPIRE.

The character of Lady Jane was portrayed by Frieda Inescort. She had a long Hollywood career playing various supporting roles--THE RETURN OF THE VAMPIRE is one of the few times that it could be said she was a "lead". Lady Jane is more than just the lead female role of the film--she's also the story's true protagonist, the one who actively leads the fight against evil.

The movie starts out in late 1918, England. Scientists Lady Jane and Prof. Walter Saunders (Gilbert Emery) are trying to solve the mystery of why a young woman is suffering from a major loss of blood. The very young granddaughter of the Professor is also afflicted, and Saunders finds two puncture marks on her neck. The Professor reads up on a book of vampirism written almost two hundred years ago by an Armand Tesla. Saunders convinces Lady Jane to accompany him to the local graveyards in a search for a vampire. The two find the undead creature's resting place...and it is none other than Armand Tesla himself (Bela Lugosi). The Professor hammers a spike into Tesla's heart....just as the vampire's slave, a werewolf named Andreas (Matt Willis) arrives. As Tesla is destroyed, Andreas reverts back to his human form.

The story now shifts to the early 1940s. Lady Jane is such a distinguished scientist that it is mentioned in the film that her name is respected all over England. Lady Jane has kept Andreas on as an assistant, and she has taught him the value of goodness. The Professor's granddaughter, Nikki, has grown up to be a beautiful woman (Nina Foch), and she is now engaged to Lady Jane's son, John, who happens to be not only a decorated RAF pilot, but a acclaimed concert pianist as well. 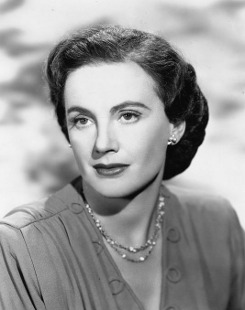 A German bombing raid scores a direct hit on the dilapidated graveyard where Armand Tesla was re-buried. Two workers cleaning up the cemetery after the raid remove the spike from Tesla's body, and soon the vampire is on the prowl again. Tesla regains his power over Andreas, and uses the man to help him get revenge on the family of Lady Jane.

Lady Jane is a very unusual female character for a horror film of this period. First of all, she's certainly no young damsel, even though Frieda Inescort was only in her early 40s when she appeared in this movie. She's a brilliant scientist, yet she still has enough of an open mind to accept the fact that vampires exist in this story. She's cool, confident, and determined. She continually bothers her friend, Scotland Yard Commissioner Sir Frederick (Miles Mander) about the dangers of Armand Tesla, despite the fact that he doesn't take her seriously. It is Lady Jane who takes the lead in the investigation of Tesla's return, and she even confronts the vampire herself, in what is probably the movie's best sequence. 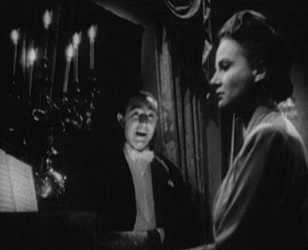 
The revived Tesla begins to turn Nikki into one of the undead. Under Tesla's power, Nikki attacks John. Lady Jane is the one who figures out what is going on. During her confrontation with Tesla, Lady Jane chases the vampire away with a cross, and she and Sir Frederick go looking for Tesla's new resting place, by following Nikki at night. Nikki leads them to the old graveyard, where Tesla and Andreas are waiting. Another German bombing raid allows the vampire and the werewolf to take Nikki away to a bombed-out church. There, the wounded Andreas pleads to Tesla to give him eternal life, but Tesla dismisses him (the vampire is far more interested in Nikki). Andreas starts to hear the voice of Lady Jane telling him about the power of goodness, and the werewolf starts to fight Tesla. Another German bombing raid hits the church again (the Luftwaffe plays a huge role in the plot of this movie), and Andreas, Tesla, and Nikki are dazed by the blast. (Maybe bombs should be used against vampires instead of crosses.) Andreas comes to, sees that it is daylight, and drags Tesla out into the sun. Andreas also stakes him in the heart for good measure, and Tesla's skin starts to melt from his bones. Lady Jane may not have killed Tesla personally, but her influence over Andreas enabled him to overcome Tesla's control, destroy the vampire, and save Nikki.

THE RETURN OF THE VAMPIRE is Columbia's answer to the Universal "monster rallies" of the 1940s. If one did not know about the film's production history, one would assume that it was a Universal horror film. The director, Lew Landers, had actually made a Universal horror film--with Bela Lugosi, no less--1935's THE RAVEN. The story and screenplay are credited to Kurt Neumann and Griffin Jay, and both men had worked on Universal thrillers, as had actors Gilbert Emery and Miles Mander. The movie is filled with the typical classic horror iconography--atmospheric fog-shrouded sets, moody black & white photography, and yes, a "damsel" in the form of lovely Nina Foch, who spends a lot of time wandering around in a nightgown. Matt Willis' werewolf is obviously a riff on Lon Chaney Jr's Larry Talbot, and of course there's Bela Lugosi, the greatest cinematic vampire of all time.

For some reason THE RETURN OF THE VAMPIRE does not have a major reputation among classic monster movie fans. Most consider it a Universal rip-off, and even hardcore Lugosi fans tend to dismiss it. Why Lugosi lovers would look down on it has always puzzled me--at this time in his career Bela was stuck doing extreme low-budget product, and here he at least had a role in a film for a decent studio, and a vampire role at that. I think THE RETURN OF THE VAMPIRE is very well done, and far better than most of the product that Bela was appearing in--I even think this movie is better than some of the Universal horror product of the same period. Using World War II events as a major plot point in a classic horror film is a unique concept.

But what really makes THE RETURN OF THE VAMPIRE stand out is the character of Lady Jane Ainsley. Having a intelligent, resourceful woman in her forties taking vampires seriously, and opposing them, is unusual in any horror film in any time period. Inescort's understated, matter-of-fact playing of the role helps the story immensely. Many writers who cover classic horror films have referred to Lady Jane as nothing more than a "female Van Helsing"--but in a genre where the hero role is usually rather underwhelming (David Manners, anyone?), Frieda Inescort deserves credit for making Lady Jane believable. Lady Jane Ainsley is certainly an Anti-Damsel. 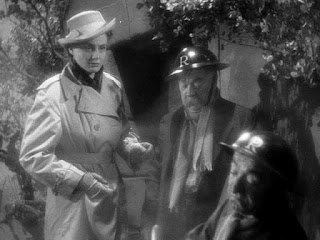 Lady Jane getting down to the business of vampire hunting