My Early Nineties Movie Chart (Or Once A Film Geek, Always A Film Geek)

While going through some stuff looking for some other stuff, I came across a historic find--my attempt to list all the movies I had seen at a theater during the late 80s and the early 90s. Each time I would go see a movie, I would write down the title, the exact date I had seen it, and a rating from one to four stars. 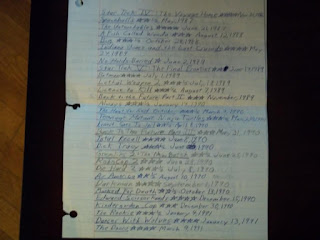 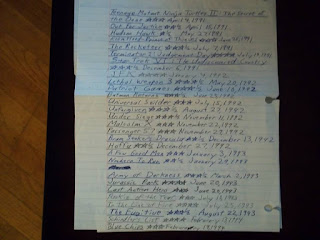 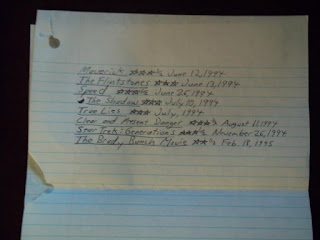 To view a bigger sized image just click on each photo.

As you can see I quit doing this in 1994. I can't remember the reason why but I can guess that it was because I wasn't good at keeping track at all the movies I had seen (I'm pretty sure I saw a lot more movies in this period than what I documented).

Looking at this list is an excellent way of judging what was popular in cinemas 25 years ago--Schwarzenegger, Harrison Ford, Mel Gibson, etc. If you are looking for rom-coms....well, there aren't any (my love life back then was just as lousy as it is now). Some of my immediate ratings are certainly worthy of being questioned when looked upon today.

For example....I noticed that I gave Warren Beatty's DICK TRACY three and half stars. That movie is all but forgotten today...if I saw it on, say, Blu-ray, how would I react to it now? In 2015 I honestly barely have a memory of it.

I gave THE ROOKIE--a movie that is not considered one of Clint Eastwood's best--three and a half stars. I definitely would lower that rating now.

One of the earliest blog posts I wrote was on how underrated I felt THE ROCKETEER was. I obviously loved it the first time I saw it, since I gave it a rating of three and a half stars.

STAR TREK: GENERATIONS got three and a half stars? I must have been in a holiday mood.

One thing that really stuck out to me looking at this list was that I saw JURASSIC PARK and LAST ACTION HERO on the same day--June 20, 1993. My brother Robert went with me to both....and I distinctly remember how great an experience JURASSIC PARK was, and how disappointing LAST ACTION HERO was in comparison.

If this list proves anything, it's that even back then I was trying to find a way to define and articulate my love for movies. Now I attempt to do that with a blog. The more things change, the more they stay the same.