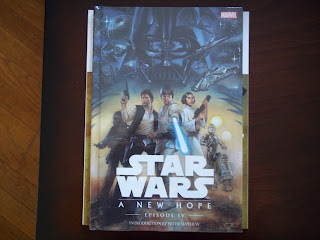 Disney and Marvel continue to ride the Star Wars gravy train with a re-issuing of the original Marvel comic book adaptation of the 1977 film--this time in hardcover and "remastered" with new coloring.

Just about any kid in 1977 had at least some of the Marvel Star Wars comic books (like me). Marvel's adaptation of the film was spread out over six standard issues, and later in the year the issues were combined into a special issue that contained the whole story.

Today the idea of Marvel doing a Star Wars comic seems a no-brainer, but actually the company was taking something of a chance. By the mid-1970s comic book movie adaptations were becoming somewhat scarce, and they usually covered the movie story in one basic issue. Marvel's decision to devote six issues to an unknown property paid off big--I can't tell you how many original Star Wars comics were bought at the time, but trust me, those things were everywhere when I was a kid.

Having the movie story spread out over six issues also enabled Marvel to do a rather thorough recreation of the film. Marvel even put in scenes that were not in the original theatrical cut, such as Luke and Biggs' talk on Tatooine and Han Solo's encounter with Jabba the Hutt in Docking Bay 94 (this means that anybody who read the comic back in '77 knew all about this scene way before it would be included in the Special Edition release years later). Jabba, by the way, is pictured in the comic as a green-colored walrus-faced creature.

Written by Roy Thomas and illustrated by Howard Chaykin, the Marvel adaptation covers the look and the feel of the movie very well. There are some slight differences, such as subtle dialogue changes (in the majority of the comic Luke refers to Han as "Solo"). Luke himself comes off looking a bit more like the 1980s cartoon character He-Man instead of Mark Hamill (I think this was because Marvel may have wanted a more buff looking male hero). Chewbacca also looks a lot more muscular (and a lot more monstrous). During the comic's Death Star battle sequence, Luke is part of Blue squadron instead of Red--thus he is Blue Five instead of Red Five. Some of the designs of the various spaceships are bit off, but for the most part any Star Wars fan will recognize this universe and accept the comic as a true adaptation.

The one major difference the original Marvel comic had over the movie was that the comic used a distinct color scheme for many outfits and locations that did not match what was on screen. Marvel-Disney have tried to alleviate this by having the entire adaptation re-colored. The colors certainly match the movie now. I'm sure there will be purists who will object at this, but I personally don't think it's that big of a deal.

This re-issuing is in hardcover, with high-quality paper, and it contains all six issues, with reproductions of the covers of all the issues. There is an introduction by Peter Mayhew, the actor who portrayed Chewbacca.

Going through this adaptation brought back a lot of memories for me--I even remembered certain actual panels (such as the one where Darth Vader uses his lightsaber to kill Obi-Wan--I firmly believe that picture is more dramatic than what happened on screen). I'll fully admit that I read the 1977 Marvel Star Wars comic before I got a chance to see the movie--I'm sure a lot of kids did back then. You have to realize now that in those days there was no DVD or Blu-ray--if you wanted to find a way to "own" a movie, a comic book adaptation was as close as you were going to get. I must have read the Marvel version of STAR WARS hundreds of times. It will always have a special place in the geek part of my heart. 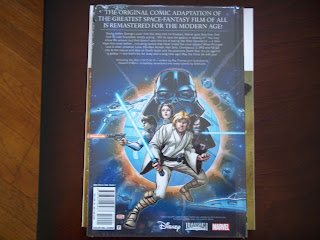