SHERLOCK HOLMES AND THE DEADLY NECKLACE 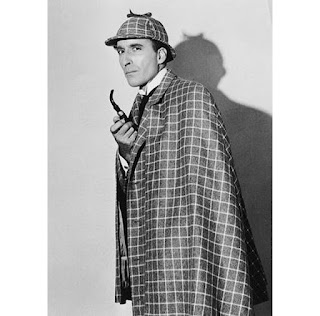 Being in a Holmesian mood after seeing Ian McKellen in MR. HOLMES, I decided to take the opportunity to go on YouTube and watch one of my favorite actors of all time in his first stab at the role of the great detective--Christopher Lee in 1962's SHERLOCK HOLMES AND THE DEADLY NECKLACE.

The official original title of this German/Italian/French production is SHERLOCK HOLMES UND DAS HALSBAND DES TODES. In the early 1960s Christopher Lee moved from London to Switzerland, and he appeared in a number of European-made films. This Sherlock Holmes tale was produced by Germany's Artur Brauner, best known for his prolific output of what are called "krimi" movies. The "Krimi" genre has as much of a cult following as do Spaghetti Westerns or the Giallo films. Most krimis are based on the works of British mystery writer Edgar Wallace (who the Germans have a major obsession for), and they have several common elements--stark black & white photography, bizarre plots and characters, and annoying jazz scores. I have watched a few krimis and I own some on DVD--it's very hard to describe them to someone who has never seen one. A typical krimi is a mish-mash of film noir, crime thriller, serial adventure, pulp sci-fi and Gothic horror. Some krimis are inventively entertaining and some others are sleep-inducing.

You can't really call SHERLOCK HOLMES AND THE DEADLY NECKLACE a true krimi--it is more like a kind-of-krimi. This movie appears to be set in the early 1900s (most krimis were set in the contemporary 1960s), despite the fact that many of the female extras are wearing early 1960s hairstyles and hemlines. The movie is in black and white and it does have a very mediocre jazz score--both hallmarks of the krimi genre.

The story concerns Sherlock Holmes and his arch-enemy Professor Moriarty battling over the possession of a priceless necklace supposed to have once been owned by Cleopatra. In this tale Scotland Yard does not believe that Moriarty is the master of crime that Holmes says he is--the authorities consider Moriarty an honorable academic, and they also look upon Holmes as something of a nuisance.

There's really nothing very thrilling--or very deadly--about SHERLOCK HOLMES AND THE DEADLY NECKLACE. If Moriarty is such a powerhouse of villainy why is he spending so much time trying to get a piece of jewelry? Apparently the budget didn't allow for any real earth-shattering crimes. While watching this movie it reminded me of one of the lesser Basil Rathbone Universal Holmes movies made in the 1940s. That's not surprising, considering that the screenplay for DEADLY NECKLACE was by Curt Siodmak, who had written many Universal thrillers during the World War II period.

Another reason I was reminded of the Universal Rathbone series was that Christopher Lee, made up with a false nose, looks very much like Basil Rathbone in my opinion. Lee's Holmes in this feature is also very much like Rathbone's, attitude-wise. Lee plays Sherlock in a somewhat surprisingly low-key manner....he's certainly in a better mood than Peter Cushing's Sherlock in Hammer's THE HOUND OF THE BASKERVILLES. At one point in the story Dr. Watson (Thorley Walters) foolishly reveals that he and Holmes are eavesdropping on Prof. Moriarty, and Holmes' reaction is one of mild amusement.

Holmes' deductive skills in THE DEADLY NECKLACE are somewhat low-key as well--the character here is constantly giving the London Times credit for all his knowledge, and at one point he even uses a rolled-up edition of the newspaper in self-defense! With Lee in the role one expects an authoritarian, incisively brilliant Holmes--but we don't get that here (the fault of the script, not Lee).

All in all it is almost impossible to judge Christopher Lee's performance in this picture, because in the only versions available of SHERLOCK HOLMES AND THE DEADLY NECKLACE, Lee's voice has been dubbed. This happened fairly often in Lee's early 1960s European work (for example Lee was dubbed in two different movies directed by Mario Bava--HERCULES IN THE HAUNTED WORLD and THE WHIP AND THE BODY). Not only does the dubbed voice sound nothing like Lee, it sounds very American! Thorley Walters as Watson was also dubbed, and this voice too sounds more American than English. It's a shame not to be able to hear Lee's voice, but the dubbing of Walters may have been even worse--as anyone who has seen Thorley Walters in a film can tell you, most of his performance comes from his unique voice mannerisms.

If we could hear the voices of Christopher Lee and Thorley Walters, would SHERLOCK HOLMES AND THE DEADLY NECKLACE be a better film? Maybe, but not by much. Even at only 85 minutes (that is the length of the version I viewed on YouTube), the movie has a tendency to drag. Everything I have been able to read about SHERLOCK HOLMES AND THE DEADLY NECKLACE mentions that it was a chaotic shoot--no doubt due to the fact that it was a multi-national co-production.

The credited co-directors on DEADLY NECKLACE are none other than Terence Fisher, and Frank Winterstein. Of course Terence Fisher was the legendary director of the Hammer Gothics (including the aforementioned THE HOUND OF THE BASKERVILLES). Getting Fisher to come to Germany to direct Christopher Lee as Sherlock Holmes was a coup--but for whatever the behind-the-scenes-reasons, it didn't work out. How much Fisher actually directed of THE DEADLY NECKLACE, and why he was given co-director billing with someone else, remains unknown. On the quotes I have found of Fisher talking about the film, he practically dismisses it.

Christopher Lee would spend a great amount of his acting career connected in one way or another to Arthur Conan Doyle's greatest creation. Before SHERLOCK HOLMES AND THE DEADLY NECKLACE Lee had played Henry Baskerville in Hammer's THE HOUND OF THE BASKERVILLES. In 1969 Lee would appear as Sherlock's brother Mycroft Holmes in Billy Wilder's under-appreciated THE PRIVATE LIFE OF SHERLOCK HOLMES. And in the early 1990s, Lee played Sherlock Holmes once again in two mediocre television films. Today SHERLOCK HOLMES AND THE DEADLY NECKLACE must be seen as a missed opportunity. In 1962 Lee was the perfect age to play an authentic Holmes, and Thorley Walters was an inspired choice as Watson (Walters would play the doctor several other times during his acting career). A few years later, in 1965, the Sherlock Holmes vs. Jack the Ripper tale A STUDY IN TERROR was filmed--can you imagine if that movie had starred Lee and Walters, and had been directed by Terence Fisher?

Sadly Christopher Lee never had the chance to play Sherlock Holmes at the right time in the right film. If you are a Christopher Lee fan and you have not seen SHERLOCK HOLMES AND THE DEADLY NECKLACE, I recommend you do so--just for a tantalizing glimpse of "what if?".