WAR-GODS OF THE DEEP On Blu-ray 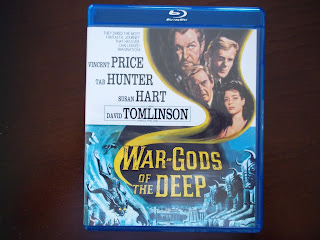 Kino Lorber continues to put out more AIP horror and science-fiction films on Blu-ray, and one of their latest is 1965's WAR-GODS OF THE DEEP, starring Vincent Price.

I have always had an affection for this title, because I first saw it back in the mid-1980s on the Son of Svengoolie show. It is an okay little feature, certainly not on the level of the Edgar Allan Poe movies featuring Vincent Price. AIP tried to make people think that WAR-GODS OF THE DEEP was based on Poe, by having Price recite lines from the author's poem The City in the Sea during points in the film. (The British title of this movie was actually THE CITY UNDER OF THE SEA.)

WAR-GODS OF THE DEEP does have some Poe-like elements--but it also mixes in ingredients from Jules Verne, H. G. Wells, Walt Disney, and George Pal. The setting is 1903 on the southern coast of England. An American engineer (Tab Hunter) and a flaky artist (David Tomlinson) discover a ancient city under the sea, lorded over by a mysterious figure known as the Captain (Vincent Price). The Captain and his band of smugglers inadvertently discovered the city 100 years before, and due to some strange quality of the city's atmosphere, the Captain and his crew have not aged. Unfortunately the city rests near an underwater volcano, which is about to erupt. The two heroes must find the beautiful Jill (Susan Hart), who was kidnapped by the Captain, and return to the surface before the volcano explodes--and before they can be caught by the tribe of "Gill Men" who are under the control of the Captain.

WAR-GODS OF THE DEEP tries to be an epic old-fashioned adventure story, but due to the budget--and a script that puts forth a number of ideas that never seem to go anywhere--it falls short. Price dominates the film as the Captain--one wishes that the story had explored his character more. Many of the Captain's actions are not properly developed, such as a subplot which reveals that the man has kidnapped Jill because she resembles his late wife (this being a 1960s AIP Vincent Price movie, of course he just happens to have a portrait of the lady handy). The concept of the "Gill Men" is an intriguing one, but the creatures themselves are rather raggedy looking, as if they were the Creature from the Black Lagoon's poor cousins. One expects the Gill Men to turn on the Captain, but it doesn't happen. The underwater city seems to have been built by an ancient race who had futuristic technology (were they aliens?), but this is another idea that does not get explored.

What really hurts WAR-GODS FROM THE DEEP is a climax that brings the film to a screeching halt. The heroes put on some quaint diving suits to escape the underwater city, and Price and some of his men go after them. What follows is a bunch of people in diving suits fumbling around, with various close-ups of the principal actors looking through a diving helmet (obviously none of the main cast went underwater). If you have ever seen THUNDERBALL, you will know that nothing slows down an action movie like a major underwater scene.

Tab Hunter and Susan Hart are alright as the two young leads, but the script doesn't really make their characters interesting in any way. David Tomlinson is the comic relief here, and the actor had just appeared in MARY POPPINS, so his casting was sort of a coup for AIP. Tomlinson's companion in this film is a chicken--and the chicken even gets special billing in the credits.

WAR-GODS OF THE DEEP was directed by the great Jacques Tourneur, and co-written by veteran screenwriter Charles Bennett. Tourneur and Bennett had already collaborated on one of the best British thrillers of all time, 1957's NIGHT OF THE DEMON. Considering that Tourneur had made such classics as CAT PEOPLE and OUT OF THE PAST, and Bennett had written for such filmmakers as Alfred Hitchcock, one expects WAR-GODS OF THE DEEP to be better than it is.

You may now be asking--why do I say I have an affection for this film, after pointing out its flaws? Maybe I like WAR-GODS OF THE DEEP for what it could have been instead of for what it is. That may sound strange, but movies like this have always fired up my imagination. There's a lot of concepts put forth in the story that could have been handled better--but at least the movie does have some concepts. Jacques Tourneur does sneak in a few moments that remind one of his work with Val Lewton, and above all there is the magnificent presence of Vincent Price--once he begins to describe his underwater environs the viewer totally buys into it. No other actor could inhabit a role like the Captain the way Vincent Price could.

The Blu-ray looks fine, but the only extras are an original trailer and a nice 11 minute interview with Tab Hunter.
Posted by Dan Day, Jr. at 6:34 PM