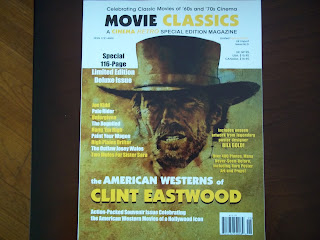 I've extolled the virtues of Cinema Retro magazine many times on this blog. It is one of the best classic movie magazines available, and their special editions--in which they devote a whole larger-sized issue to one subject--are must haves. I'm proud to say I have every single Cinema Retro special edition, including the latest one, which deals with the American Westerns of Clint Eastwood.

This issue is a 116-page spectacular, filled with hundreds of stills, on-set photographs, and reproductions of poster art. 9 different Eastwood Westerns are covered, including THE BEGUILED, which some may consider a strange choice (I don't). The issue is worth buying just for the pictures alone--but the text, written by Lee Pfeiffer, is even more impressive. Pfeiffer gives out exhaustive detail on the making of all the films herein, and also analyzes and critiques them as well. The result makes one wish that Pfeiffer would write a full-length book on all of Eastwood's movies. The author has a huge affection for Eastwood and his work, but at the same time doesn't shy away from any controversies that happened during any of the productions, such as Eastwood firing Phillip Kaufman at the beginning of filming THE OUTLAW JOSEY WALES.

This special edition is so densely packed with detail that the reader will get far more out of it than most hardcover books that have been written about Eastwood. Any true Eastwood fan needs to get a copy of it. The magazine is only available from Cinema Retro's website.

I think what makes Cinema Retro different is that editors Pfeiffer and Dave Worrall have a genuine fan's love for the material that they showcase, and a historian's love for factual & interesting information about that material. Out of the five special editions that the magazine has published, four of them have dealt with Clint Eastwood.....and while I'm certainly not complaining about that, I would like to see other subjects explored in the future. How about an issue devoted to the making of John Wayne's THE ALAMO? Or one on the films of David Lean? Or another "Foto Files" special edition featuring the ladies of Hammer Films?
Posted by Dan Day, Jr. at 2:43 PM