A Bevy Of Barbara Steele Films On Blu-ray 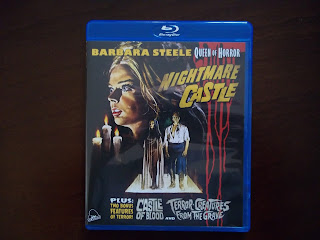 There is no doubt that Barbara Steele is one of the most iconic figures in the history of fantastic cinema. Severin Films pays homage to the Queen of Spaghetti Horror with a Blu-ray release consisting of three of the actresses' 1960s shockers: NIGHTMARE CASTLE, CASTLE OF BLOOD,  and TERROR CREATURES FROM THE GRAVE.

Severin had already released NIGHTMARE CASTLE on DVD a few years ago uncut, along with special features. This Blu-ray also has the uncut version of the film, but this time with English credits naming the movie THE NIGHT OF THE DOOMED. Severin's DVD of NIGHTMARE CASTLE looked good, but the Blu-ray looks simply spectacular, highlighting Enzo Barboni's exquisite black & white cinematography. The movie itself is one of Barbara Steele's best showcases, with her playing two roles--a shrewish wife tortured & killed by her mad scientist husband at the beginning of the story, and her timid stepsister, who the scientist also marries in an attempt to get control of the family fortune. The scientist hopes to do this by driving the stepsister insane, but the spirit of the first wife beats him to it. NIGHTMARE CASTLE may be the ultimate representation of the Italian Gothic horror film, containing all the main ingredients of that particular genre: madness, adultery, and characters constantly roaming around old dark houses while holding up candles. (What stock military footage is to the 1950s American science-fiction movie, people walking around with candles is to the 1960s Italian Gothic horror movie.)

NIGHTMARE CASTLE also features some other familiar genre names alongside Steele, such as Paul Muller (LADY FRANKENSTEIN) as the scientist and Helga Line (HORROR EXPRESS). The movie's organ-laden music score is by none other than Ennio Morricone.

Carried over from Severin's NIGHTMARE CASTLE DVD is a 30-minute interview with Barbara Steele, in which she goes over her entire career. It's a fascinating talk, and a must-see for any Steele fan. Also carried over to this Blu-ray is a short talk with NIGHTMARE CASTLE director Mario Caiano. New to this release is an audio commentary with Barbara Steele and genre expert David Del Valle. Del Valle makes some interesting observations on the production (some of which Steele does not agree with), and even compares Steele's persona to that of Louise Brooks. Steele makes some very insightful comments herself, and one hopes that she does more commentaries. (By the way, Steele was able to dub her own voice on the English soundtrack of NIGHTMARE CASTLE for her role of the stepsister, so this is one of the very few times viewers get to hear her real voice during one of her horror movies.)

Next up is the American version of director Antonio Margheriti's CASTLE OF BLOOD. This may be Margheriti's best film (he's better known as Anthony M. Dawson in the U.S.), a tale brimming with pure Gothic atmosphere. A journalist attempting to interview Edgar Allan Poe during the famous writer's visit to England winds up agreeing to take part in a wager where he attempts to spend an entire night at a haunted castle. As the night goes on the man becomes involved in the past lives of the castle's undead occupants, including the lovely Steele, who must be the most attractive ghost on record. Like most Italian Gothics, there's a fair amount of hanky-panky going on here (as a matter of fact, Steele plays adulterous wives in every feature on this Blu-ray). The interior production design of the castle is magnificent, and Margheriti certainly knew how to make an entertaining film.

If you happen to own the Synapse DVD of CASTLE OF BLOOD, make sure you hold on to it, because this Blu-ray version of the movie is not uncut. The picture image here is sharper, but it has lots of scratches on it. as does the version of TERROR CREATURES OF THE GRAVE included on this disc. Watching the movies this way, with all the scratches and the sound pops, made me feel as if I was watching them on late night TV--I have a feeling, however, that some people out there may not appreciate seeing CASTLE OF BLOOD and TERROR CREATURES FROM THE GRAVE in less than pristine condition, especially on a Blu-ray.

The main extra for CASTLE OF BLOOD is a short featurette which includes an audio interview with Antonio Margheriti. An original trailer for the movie is also on this Blu-ray.

I had never seen TERROR CREATURES FROM THE GRAVE before, and I had never really heard much about it, so I was pleasantly surprised when I did watch it on this Blu-ray--it was much better than I anticipated. The story begins with a solicitor receiving a mysterious letter from a man with the wonderful name of Jeronimus Hauff. Hauff asks the lawyer to come to his European villa and help change his will. The lawyer arrives only to find out that Jeronimus died (supposedly from an accident) nearly a year ago. The spooky villa is built on the remains of medieval plague victims (because of this, did Jeronimus get a discount when he bought the place??), and apparently Jeronimus was attempting to make contact with them. The lawyer joins up with Jeronimus' young daughter to solve the strange goings-on, all the while having suspicions about Jeronimus' slinky second wife Cleo (Barbara Steele of course). During most of the story one assumes that it is going to wind up being one of those "the dead person isn't really dead" tales, but once the climax starts up the movie really goes out of left field in a way that will impress fans of weird cinema. (One of the advantages of Italian Gothic horror movies is that they were willing to go off on bizarre tangents that English and American-made Gothics would not.)

The main extra for TERROR CREATURES FROM THE GRAVE is a featurette with an audio interview with director Massimo Pupillo, who explains why the on-screen credits for the movie list "Ralph Zucker" as the director. The featurette also includes an interview with actor Riccardo Garrone, who admits that he barely remembers appearing in TERROR CREATURES. Garrone is amused (and amazed) that anyone would even care about the movie today. A few deleted scenes from TERROR CREATURES are presented, along with an original trailer.

Severin has done an excellent job with this Blu-ray....even though it is only a single disc, it might as well qualify as a Barbara Steele box set. When one thinks of Barbara Steele, the movies BLACK SUNDAY and THE PIT AND THE PENDULUM automatically come to mind, but it was titles like those on this Blu-ray that really cemented the lady's Gothic reputation. If this Blu-ray has enough sales, perhaps Severin (or another video company) will release decent Region A Blu-rays of other Steele films such as THE HORRIBLE DR. HICHCOCK, THE GHOST, and AN ANGEL FOR SATAN.