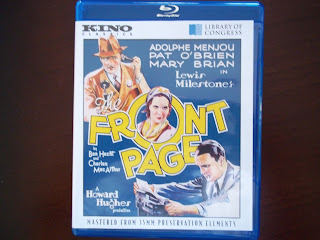 In this age of film remakes, reboots, and reworkings, it's worth pointing out that some remakes are better known than the original. HIS GIRL FRIDAY is universally considered one of the best comedies made during the Golden Age of Hollywood, and a career highlight for both star Cary Grant and director Howard Hawks. There are many fans of HIS GIRL FRIDAY that may not even be aware of the fact that the movie is a remake of THE FRONT PAGE, which has just been released on Blu-ray by Kino.

The popularity of HIS GIRL FRIDAY has all but overshadowed THE FRONT PAGE. It hasn't helped that THE FRONT PAGE is almost never shown on TV, and when it is, the quality of the print is very poor (I tried to watch it once on TCM, and it looked and sounded so bad I couldn't get through it). Kino's version isn't perfect by any means, but it looks much better than any other one available.

THE FRONT PAGE is an adaptation of a renowned Broadway play written by Ben Hecht and Charles MacArthur. The play revolves around the machinations of Chicago newspaper reporters in the 1920s. The two main characters are big-shot editor Walter Burns (played by Adolphe Menjou in the film) and his ace reporter Hildy Johnson (Pat O'Brien). The story begins with Hildy planning to marry his sweetheart (Mary Brian) and move to New York. Editor Burns schemes to keep Hildy from going by any means possible. Burns takes advantage of the situation surrounding the upcoming execution of presumed radical and cop-killer Earl Williams (George E. Stone) to get Hildy to stay on the job.

Most of the story takes place in the press room of the city court house, but director Lewis Milestone goes out of his way to avoid things from being static. There's an incredible amount of impressive camera work on display in THE FRONT PAGE--zoom-ins, extreme close-ups, tracking shots, full-circle camera movements, etc. The cinematography is even more impressive when one realizes that this production was made during the early days of talking pictures, when supposedly the camera barely moved, and the actors' motions were limited because of the primitive sound equipment. (I have to say that in most of the pictures I have seen from 1930-1931, the camera--and the actors--are moving all over the place.)

Because it is an early talkie THE FRONT PAGE does have some creaky moments. It is nowhere near as polished as HIS GIRL FRIDAY. But I think this works in THE FRONT PAGE's favor. This is a true Pre-Code film--the reporters really do look and sound like the rough & tumble guys that would work in such an environment, and the main set of the film, the press room, is as un-glamorous as you can get. The movie is very politically incorrect (the fact that Earl Williams has shot an African-American police officer seems to be a source of amusement to everyone in the cast). The character of Molly (who also appears in HIS GIRL FRIDAY) is without doubt a prostitute here. The whole atmosphere of THE FRONT PAGE has a seedy, grimy tone to it.

Of course the main difference between THE FRONT PAGE and HIS GIRL FRIDAY is that in the earlier film Hildy is most definitely a man, whereas in the later film Hildy is re-written as a woman, and Walter Burns' ex-wife to boot. In HIS GIRL FRIDAY the appealing looks & personalities of Cary Grant (as Burns) and Rosalind Russell (as Hildy) soften the hard edge of the original play & film. While HIS GIRL FRIDAY can be called a screwball comedy, you can't say that about THE FRONT PAGE--it is more of a biting satire.

There's not really any appealing characters in THE FRONT PAGE. Hildy may be trying to get away from people like his boss Burns, but in the end he's still basically the same guy he's always been--a guy willing to do just about anything to get a big story.

Adolphe Menjou and Pat O'Brien are very good in the lead roles. You totally believe these guys would cut someone's throat for a headline (I don't think you would necessarily believe that about Cary Grant or Rosalind Russell). The other reporters in the press room are played by such great character actors as Edward Everett Horton and Frank McHugh. I have to make special mention of Mae Clarke in the role of Molly, the streetwalker who feels sorry for Earl Williams. Once again she all but steals the film--the more and more I see of Mae Clarke, the more and more I am impressed of her as an actress.

Kino has attempted to put out the best version of THE FRONT PAGE as possible. As I have stated earlier, the visual quality here is much improved from other versions of the film that I have (attempted) to see, but I wouldn't say that it is outstanding. As for the sound quality...there are many times during the story where the sound level goes up and down, even during the same scene. At times it is hard to understand what the characters are saying (it doesn't help that most of the dialogue is spouted off in rapid-fire fashion). I honestly think that Kino should have added some English subtitles to this Blu-ray.

The extras include a couple radio adaptations of the story, and a very informative and enlightening audio commentary by Bret Wood. Wood relates numerous facts about the original play and the making of the 1931 movie, and he also points out the censorship problems the production had, even in the Pre-Code era. Wood also goes out of his way to mention Howard Hughes' involvement in the film as producer, and how Hughes' movie career was more important than it is usually given credit for.

THE FRONT PAGE is more of a title for film buffs than a general audience. It makes a great comparison to HIS GIRL FRIDAY, and in some ways I think it is just as good as the remake. Don't get me wrong--HIS GIRL FRIDAY is a great film, but it is a mainstream, cleaned-up version of THE FRONT PAGE.